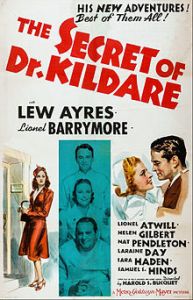 Brief Synopsis – Dr. Kildare must deal with a young girl who believes that she has a brain tumor and is starting to go blind.

My Take on it – This is a film that I had never heard of beforehand, but since Tiffany Brannan of Pure Entertainment Preparation Society chose the Kildare series for this month’s LAMB MOTM – Franchise edition, I decided to give it a shot.

The story itself here works quite well when looking at the film from the standpoint of what they are trying to present.

When this film was made in the 1930’s they obviously didn’t have medical dramas airing every night on TV since it wasn’t invented yet, so the best way to present stories like this was via film series using similar actors and characters over and over.

This particular series has more than 15 films in the mix which deal with the young Dr. Kildare and his mentor Dr. Gillespie.

Due to all this, these kind of films feel a bit too episodic and aren’t able to stand on their own and be more impactful.

Lew Ayres and Lionel Barrymore are both superb in the two main roles and the dialogue between them is great to watch because they are filled with wit and sharp jabs at one another which helps make things even more enjoyable.

The story is enjoyable to watch,  but something is missing that would make this even more impactful.

Bottom Line – Interesting idea for a film that works within its own constellation. This film feels much too episodic which takes away from any real impact from such a story. Ayres and Barrymore are both great here and the dialogue between them is always sharp and witty which helps make things even more enjoyable. The fact that this can’t really stand alone as a powerful story is quite unfortunate, but is still understood given the fact that they didn’t have serialized medical dramas on TV when this was made.

MovieRob’s Favorite Trivia – Her appearance here gives Sara Haden the distinction of having had roles in both of MGM’S longest-running and most popular film franchises. She also played the recurring character of “Aunt Milly” in the Andy Hardy movies. Interestingly, Haden’s final screen appearance was a guest shot on the 1960s TV version of…Dr. Kildare. (From IMDB)