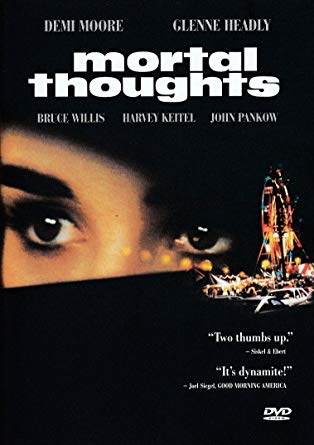 Brief Synopsis – A young woman describes to the police the events that led to the death of two people but the question of what is truth and what is fiction keeps arising.

My Take on it – This is a film that I recall hearing a bit about when it came out nearly thirty years ago, yet knew very little regarding the plot besides the fact that it starred then-husband-wife team Bruce Willis and Demi Moore.

The film has an interesting premise but is presented quite haphazardly which hurts things a lot.

The cast of this film is great, but some of them are completely wasted since the film tries much too hard to be more clever than it really is wen it should have focused on keeping things more mysterious and intriguing because that would have been much more effective.

The story is told in flashback and feels extremely manipulative in the way things are shown yet they still manage to keep parts of the story intriguing along the way.

The role played by Willis is quite small yet he manages to give us a very powerful performance because we can see how things in a marriage could reach a point where issues like this could occur, even if they shouldn’t.

Great seeing Gleanne Headly in this kind of role here and it’s too bad she didn’t make more films with challenging roles like this one.

Harvey Keitel is also quiet effective in this kind of detective role where he is able to do things very low-key throughout.

Bottom Line – Interesting idea that doesn’t work so well. The cast is great but some of them are wasted because the story tries too hard to be clever instead of intriguing and fails to be effective the whole time. The way that the story is told in flashback is a bit too manipulative but it still manages to keep things a bit intriguing.  Willis is underused here in such a small yet significant role.

MovieRob’s Favorite Trivia – The James Urbanski role was only a tiny part in the film until Bruce Willis agreed to do the film. (From IMDB)