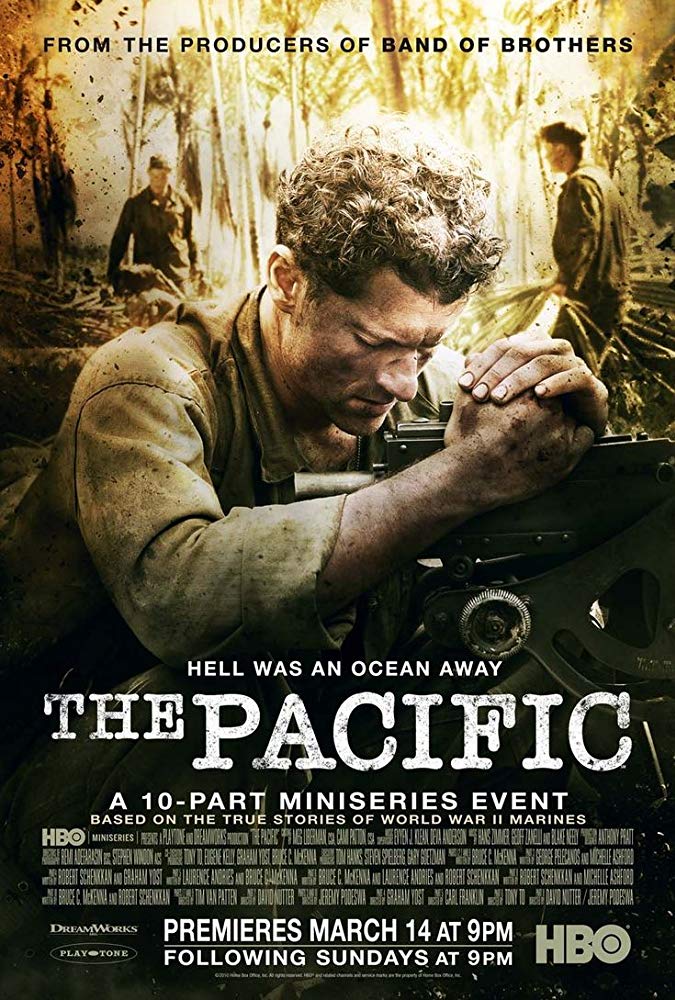 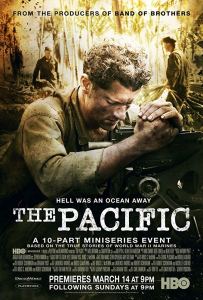 “The worst part about treating those combat boys from the Great War wasn’t that they’d had their flesh torn – it was that they had had their souls torn out. I couldn’t bear to look into your eyes one day and see no love there no spark no… no life. That would break my heart.” – Dr. Sledge

Brief Synopsis – In depth look at the hardships of war on the very men sent to fight in the Pacific theater during World War II.

My Take on it – This is a mini-series that I was highly anticipating to watch after hearing about it because I knew it was being put together by Tom Hanks and Steven Spielberg as a companion piece to their previous WWII mini-series – Band Of Brothers (2001).

Once again they do an amazing job telling such a difficult and complex story from the perspective of the “men on the ground” who must follow the orders (sane or not) that they are given.

This was the third time that I’ve seen it and it gets better and better each time.

They do a superb job of showing how war can affect men both physically and mentally yet it also shows how much men can take when faced with these problems.

This film doesn’t at all shy away from the sheer brutality of it all and I give them much credits for showing both the good and the bad that stemmed from this war because there is really no advantage in trying to sugarcoat the actions of men during the most desperate times of their lives.

This also helps add so much to the believability of these stories because it isn’t being shown as a fantasy film, but reality.

The way that we get to see how these character evolve over the course of the series is amazing because the way that they are affected by the most dangerous and desolate places that they encounter along the way helps shape who they are and who they would eventually becomes.

They must deal with their current situation as well as they can and must try to survive the enemies they face in battle along with the difficult elements of that part of the world all in the name of freedom.

The cast of this film is chosen really well and many of them actually resemble their real life counterparts.

The focal characters are developed quite well and this helps the viewer get an even better understanding of all that they need to endure along the way.

Hans Zimmer creates an amazing musical score that helps give such an amazing mood to the story and that helps things feel even more personal and poignant along the way.

The film is shot form a close perspective of the characters and the events which helps make the viewer feel as if they are right there along side them as they faced the various problems in this kind of combat situation.

The way that they are able to integrate three parallel stories together works quite well here in order for us to see things from various slighly different perspectives and that helps give the story a greater impact.

The way that the stories slightly touch or crisscross one another also adds so much to the overall feel for this kind of moving storyline.

Can’t wait to eventually see the next collaboration between Hanks and Spielberg regarding WWII since it’s suppose to be about the battle for the sky.

This is clearly among the very best Miniseries ever made.

Bottom Line – Amazing mini-series that actually gets better every time I watch it. The way that they show the way that war affects men both physically and mentally is superbly done.  They don’t shy away from the brutal aspects of it all and I commend them for even showing some very unpopular things because it helps establish to the viewer how they wish to show the truth of it all. We get to see the changes that these men experience over the course of the many years where they are sent to some of the most dangerous and god forsaken places in the world and must do all they can to survive the enemy and the elements all in the name of freedom.  The cast is superb and they do a great job developing the focal characters that we get a much better understanding of all that they needed to endure.  The music by Zimmer helps add the perfect mood for such a story and they make this film so poignant that it will leave everyone watching it with the feeling as if they are right there watching all of the problems that these men faced along the way. Really liked the way they are able to integrate three stories together and even have them touch upon one another along the way since that gives the story so much more impact.  Hanks and Spielberg made another winning WWII film together and I can’t wait for their next proposed collaboration about the pilots during the war. Highly Highly Recommended!

MovieRob’s Favorite Trivia – Originally the project was estimated at $100 million to produce, but ended up costing over $200 million, making The Pacific the most expensive television miniseries ever created by any network. (From IMDB)