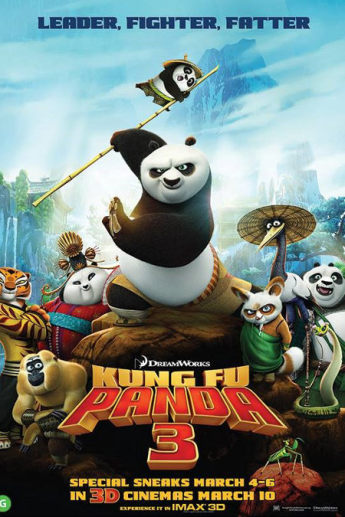 “Sometimes we do the wrong things for the good reasons” – Mr. Ping

Brief Synopsis – As a Kung Fu master, Po must deal with a new supernatural threat while still trying to find out more about his own past.

My Take on it – This film is the weakest of the three films in the franchise and unfortunately feels like they are trying to tell the same story once again that they already told twice before.

This film offers a few new twists to the story but something still feels lacking when it comes to originality with the story.

From a visual perspective, this film is quite fun to look at because the animation is done some fluidly the entire time.

Once again, the action and fight scenes are done really well and we get to see how the animators can create sequences where various species of animals are fighting and it looks plausible the entire time.

Th best thing about this film is the fact that they were able to bring back most of the original voice cast once again since they all already embody their various characters so well.

The addition of both Bryan Cranston and JK Simmons adds to the enjoyment of watching this film.

I’m glad that they were able to find a way to give this story a fitting conclusion even if they leave some things open if they choose to reopen the series again in the future.

Bottom Line – Weakest film in the trilogy that once again feels as if it’s offering the same story as in the previous two installments with slights twists on it.  From a visual perspective, this film is great to look at and as with the previous two films, they are able to animate the action and combat sequences quite well especially since they must animate so many different species during these various battles.  It’s great to see most of the original voice cast return in this film and the addition of Cranston and Simmons helps things even more.  This film has a fitting conclusion to the trilogy that works well.

MovieRob’s Favorite Trivia – During the traveling montage, Po and his father endure on their way to the secret panda village, they pass by two large stones that sit on an equally stone-like terrain, and are slanted toward the right of the screen. Shrek and Donkey pass by these same stones on their way to Fiona’s castle in Shrek (2001). (From IMDB)