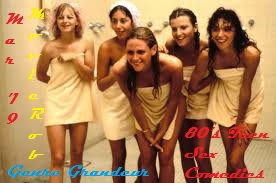 For this month’s first review for Genre Grandeur – 80’s Teen Sex Comedies, here’s a review of Up the Creek (1984) by Me.

Thanks again to Christopher Cooper of Angelman’s Place for choosing this month’s genre.

“You wouldn’t lie to me?” – Heather Merriweather

Brief Synopsis – A group of college misfits are sent to represent their school in a rafting race.

My Take on it – This is a film that came to mind immediately after Chris suggested this genre for this month.

As a kid of 10, I recall seeing this film in the theater and it has always remained one of my guilty pleasures of the genre in the 35 years since.

(I have no idea how or why my parents let me go see this at that age because there is no way in Hell that I’d let my 11 year old son, let alone my 14 year old son see this film even in the privacy of our own home.)

The cast of this film is great and I love seeing Tim Matheson, Jennifer Runyon, Dan Mognahan, Stephen Furst and Sandy Helberg (yes, the father of Simon Helberg from The Big bang Theory) in this film.

They are all hilarious and add so much to the silly plot.

The story itself is pretty silly and there is really no world (or even parallel world) where this premise could work on a serious level, yet it still remains one of the most enjoyable films of the genre because it never takes itself seriously.

It plays out like a White water rafting version of Animal House (1978) and encompasses so many of the stereotypical kinds of characters used in so many of the iconic 80’s teen sex films.

As with all films in the genre, they never miss the chance to show a bit of T&A along the way while putting all of the characters in precarious and strange positions throughout even when things get really silly and juvenile.

This helps keep things so much fun from start to finish especially if the viewer doesn’t take any of the story seriously.

Bottom Line – This is such a guilty pleasure film for me. I have loved it ever since I first saw it in the theater when I was 10. The cast is great and Matheson is the perfect choice in the lead. His chemistry with the other characters is great especially with Runyon.  The story is quite silly and unrealistic yet it still remains one of the most fun films of this genre because it doesn’t take itself seriously yet still tries to give us an Animal House (1978) type of story while having the characters face the rapids and the stereotypical college boys and girls that were so iconically used in films of the 80’s.   This film doesn’t miss any opportunity to show some T&A whenever it can and manages to put all of its characters in very precarious positions throughout which helps keep things so enjoyable despite the stupidity of it all. Recommended!

MovieRob’s Favorite Trivia – Michael Keaton was originally approached to play Bob McGraw. The role later went to Steve Guttenberg, who, over the course of a weekend, instead signed on to “Police Academy”, leaving the production without a lead actor. (From IMDB)