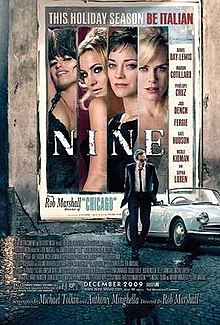 “[From trailer] Directing a movie is a very overrated job, we all know it. You just have to say yes or no. What else do you do? Nothing. “Maestro, should this be red?” Yes. “Green?” No. “More extras?” Yes. “More lipstick?” No. Yes. No. Yes. No. That’s directing.” – Liliane La Fleur

Brief Synopsis – A famous director tries to find a way to make his newest film a success by trying to reconcile with the memories of 9 women who helped shape the path he has taken in life.

My Take on it – This is a film that I have avoided for so many yeras since I heard years ago how bad this film was.

This movie is truly a mess and that has much to do with the fact that it lacks a real anchor along the way for the story.

So much of the story doesn’t make sense and that attributes to making this film almost incomprehensible.

The movie is filled with different segments between the main character and his “muses” but they all fail to have some kind of coherent connection between them all along the way.

As a musical, the thing that should be anchoring this film is the music which should be able to evoke strong emotions from the audience, yet none of the sings are memorable enough to do so.

The story feels very choppy and disjointed from start to finish which hurts things even more.

The film is filled with a great cast and the actors and actresses that appear here are quite talented, but teh lack of a coherent story and the limited screen time of each of these talented actors hurts things so much since none of them are able to make any kind of impact on the virtually non-existent storyline.

Bottom Line – Terrible film because it makes almost no sense. The various segments fail to have coherent connections between them and things feel much too choppy and disjointed throughout. The songs are what should be bringing this film together but none of them are very memorable enough to evoke sufficient emotions from the audience.  The cast is filled with some amazingly talented actors and actresses, but none of them get enough screen time in order to make an impact on the almost non-existent storyline.

MovieRob’s Favorite Trivia – “Take It All”, “Cinema Italiano” and “Guarda La Luna” were specifically written for the movie by composer Maury Yeston. The first one was nominated for an Oscar and the second one for a Golden Globe. They both lost to “The Weary Kind”, by T Bone Burnett & Ryan Bingham from Crazy Heart (2009). “Take It All” was originally written as a trio for Nicole Kidman, Marion Cotillard and Penélope Cruz, but just before shooting, rearranged as a solo for Cotillard, according to music supervisor Matt Sullivan. “Heart-wrenching” is how Yeston describes the performance by Cotillard. (From IMDB)