This review is part of the Monthly ABC Film Challenge over at Movie Reviews 101.  This month’s theme is Action Films. 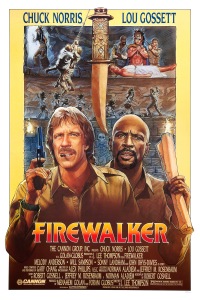 “FRUITCAKE? FRUITCAKE? Listen Bucko, I happen to be a highly educated, intelligent girl with an I.Q. that would put you pea-brain in the cellar. So remember, If it weren’t for me, you wouldn’t be here. Call me for dinner.” – Patricia

My Take on it – AS my second choice for this challenge, I decided to go with a film that I had never seen before and after watching it, I can safely say that this will probably be the sole time that I ever watch this film because it is so bad.

To call this film an action film is a huge overstatement and it feels as if they were just trying to cash in on the success of the Indiana Jones films and wanted to give us a similarly themed film, but unfortunately, this doesn’t work on any level.

The fact that Chuck Norris and Louis Gossett Jr. star in this film gave me some hope that this might have some fun martial arts sequences, but the best we could get here are a few bar room brawls where Gossett is able to do more damage than Norris who is a martial arts expert.

They never manage to develop the characters to more than a superficial level and that hurts this film so much.

I’ve always been a HUGE fan of Sonny Landham especially his roles in 48 Hrs (1982) and in Predator (1987), but he is an atrocious villain here and doesn’t do much more than grunt his way through the film.

To top it all off, they try to make this movie feel even more like and Indiana Jones movie by adding John Rhys-Davies as a sidekick, but even that ploy can’t help save this disaster.

Bottom Line – Terrible action film that feels like a cheap imitation of an Indiana Jones film that doesn’t work on any level. The characters are developed quite poorly and even with the likes of Norris and Gossett Jr. nothing could help save this horrendous film. The story plays out in a very silly way and the only real action in this film is a few brawls in bars where surprisingly Gosstאt does more damage than the martial arts expert Norris. I’ve always been a big fan of Sonny Landham who was great in both 48 Hrs (1982) and in Predator (1987), but he is an atrocious villain in this film and even his grunting is annoying the whole way through.  In order to make it seem like another Indy film, they even recruited Rhys-Davies as a sidekick but he also doesn’t manage to be of any real help here.

MovieRob’s Favorite Trivia – Chuck Norris and Louis Gossett, Jr. have their stars back to back on the Hollywood Walk of Fame. (From IMDB)