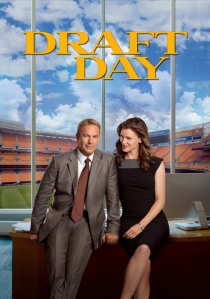 “There’s no such thing as a sure thing. At the end of the day, the only thing that matters is what you think.” – Ali

Brief Synopsis – A NFL General Manager must deal with the pressures of life and work on the day where he must make the decision of which player to draft in order to help reshape his losing team.

My Take on it – This is a film that I saw a few years back and enjoyed a lot.

Someone mentioned it to me recently, so I decided to check it out again to see if I’d still enjoy it.

The premise of this film is quite interesting and it works very well despite the fact that it could have been so boring since it deals with the negotiations and picking of an NFL draft pick.

Kevin Costner is back on top with his performance here and is able to show that he can still be a lead actor and carry a film even after numerous failures.

He is able to make us care about his character and the predicaments that he gets himself into.

The film is edited really well and allows there to even be much anticipation and suspense in this kind of story.

In addition to Costner, the supporting cast is also great and we get to see some great actors in significant large and small parts.

My favorite was the short scene that Sam Elliott appears in.

They all help make this story feel even more plausible and enjoyable as things move along at a fast pace.

The do an excellent job explaining the way that things work here in a simplistic and fun fashion and it’s nice to see that one doesn’t need to have prior knowledge about football or the way that drafts work in order to comprehend everything going on.

Bottom Line – Great premise that works really well especially given the fact that it could conceivably have been a really boring film dealing with making a choice for a draft choice. Costner is great in the lead and proves once again that he can still take on the lead in a film and make us care about his character throughout. The supporting cast is also great and we get to see great work by lots of familiar actors and actresses who help make this story more plausible and enjoyable at the same time.  Love the fact that one doesn’t really need to know much about the sport of Football or the Draft itself since they manage to explain things to us in a simplistic yet entertaining way. Recommended!

MovieRob’s Favorite Trivia – The actual 2014 NFL draft had a lot of similarities to the plot of the movie. The actual draft had a Heisman trophy winning quarterback falling in the draft, the Cleveland Browns making a pick that was questioned heavily, and the Browns making multiple trades. Jon Gruden even stated, “this is better than Draft Day!” on air during the actual draft. (From IMDB)