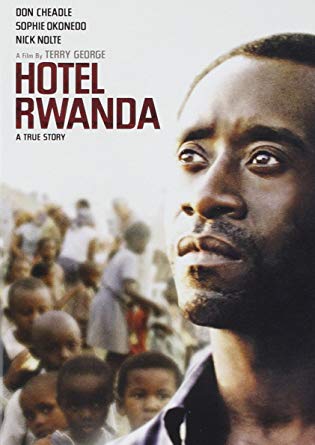 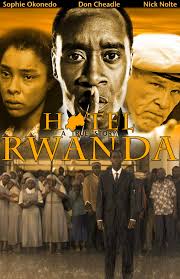 “There will be no rescue, no intervention for us. We can only save ourselves. Many of you know influential people abroad, you must call these people. You must tell them what will happen to us… say goodbye. But when you say goodbye, say it as if you are reaching through the phone and holding their hand. Let them know that if they let go of that hand, you will die. We must shame them into sending help.” – Paul Rusesabagina

Brief Synopsis – As a civil war begins to brew in Rwanda between the Hutu and Tutsi tribes, a hotel manager does all he can to keep his family and numerous other refugees safe from the ensuing carnage.

My Take on it – This is a film that I enjoyed immensely the first time I saw it nearly a decade ago and was quite interested in revisiting it to see if my thoughts stayed the same.

This is a great film that first and foremost is able to showcase the acting talent of Don Cheadle who proved with this role how versatile an actor he can be.

He is easily able to carry this entire film on his own shoulders and he successfully manages to portray a character who must give such an emotional punch that is quite powerful throughout.

This film is able to show the impact that the Civil War in Rwanda had on the population which forced them to find ways to survive during the carnage despite wanted to live their simple lives in the usual ways.

The characters that are created here don’t feel at all like caricatures or stereotypes and we can see the various lengths that some of these brave men and women were willing to go in order to help as many of their countrymen survive as possible.

In addition to Cheadle, this film has a great supporting cast including Nick Nolte, Joaquin Phoenix and Sophie Okonedo who each give great performances in the complex situations that they all find themselves in.

Both Cheadle and Okonedo were Oscar nominated for their performances here for lead actor and supporting actress but neither was able to take home Gold.

Bottom Line – Great film that is able to showcase the acting talent of Cheadle. He is able to carry this film so easily on his shoulders while still showing that he can play such a powerful and emotional role so successfully.  The movie shows the impact that the Rwandan Civil War had on people who just wanted to live a normal life.  The characters don’t feel like caricatures at all and manages to be quite impactful as we see the lengths certain people were willing to go to in order to help their fellow countrymen.  Besides Cheadle, the supporting cast is also great with Nolte, Phoenix and Okonedo also giving great performances.  Cheadle and Okonedo were both nominated for Oscars for Lead Actor and Supporting Actress for their performances here, but neither manages to win. Recommended!

MovieRob’s Favorite Trivia – The screenwriter spent one year writing the first draft of the script. During the process, he called the Rwandan embassy in DC. The woman who picked up the phone was a survivor who stayed at the Milles Collines Hotel. (From IMDB)