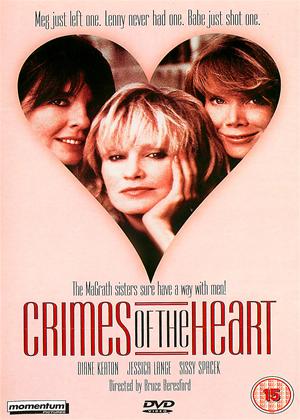 “The damage to the spinal column’s not yet been determined. But his breathing’s stabilized and his liver’s been saved.” – Lucille Botrelle

“None of this is good news Lennie Magrath! It’s all a grueling nightmare and you mark my word those responsible will pay dearly!” – Lucille Botrelle

Brief Synopsis – After one of a trio of sisters shoots her abusive husband, her two sisters come for a visit in order to try and find a semblance of order and structure in all of their lives.

My Take on it – This is another film that I have for some reason avoided watching for decades but my quest to watch all films featuring Oscar nominated performances led me to watch it.

The film (and play it is base don) is a nice character study since it allows us to learn how each of these three women who were brought up in the same household and received similar childhood influences could turn out so differently.

The way that each of them reacts to challenges in their lives is interesting to see as things play out.

The dialogue is superbly written and delivered in a super fast fashion which allows us to get a better understanding of each of the characters.

The cast is nicely chosen with Diane Keaton, Jessica Lange and Sissy Spacek playing the trio of sisters.

In addition, the supporting cast works quite well and it’s fun to watch Sam Shepard and Tess Harper lend a hand to the already complex lives of these characters.

Harper was nominated for an Oscar for her performance in this film.

The story on a whole tho, drags along a bit too much and things feel too long and drawn out despite the fact that it is quite fascinating to listen to the conversations of these women.

The super slow pacing of things that causes the story to meander too often takes away from the intimate and poignant feeling that this film should have.

Bottom Line – This is a film that is a nice character study because we get to see how each of these women brought up under the same roof and with the same childhood influences deal with the various surprises that life thrown at them.  The cast is superb with Keaton, Lange and Spacek all doing nice jobs as the trio of siblings. The supporting cast is also fun to watch with Shepard and Harper helping to move the story along. Harper was nominated for an Oscar for Best Supporting Actress for her performance in this film. The dialogue is super fast and works quite well as we learn about the lives of these women.   Unfortunately tho, the story drags a bit too much and although many of the conversations between the sisters are fascinating to listen to, things meander along a bit too much which takes a lot away from the intimacy and poignancy of it all.

MovieRob’s Favorite Trivia – The original Broadway production of “Crimes of the Heart” by Beth Henley opened at the John Golden Theater in New York on 4th November 1981, after 13 previews starting on 23rd October the previous month, and ran for 535 performances, until the play closed on 13th February 1983. The play was nominated for four Tony Awards in 1982 including Best Play. Henley also wrote the screen play for this movie. (From IMDB)