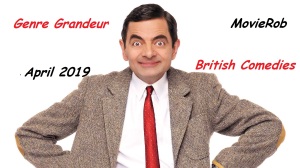 For this month’s next review for Genre Grandeur – British Comedies, here’s a review of Man Up (2015) by Damien of the Damien Riley Podcast.

Thanks again to Allie of Often Off Topic for choosing this month’s genre.

Please get me your submissions by the 25th of May by sending them to royaljdub@movierob.net

Try to think out of the box! Great choice J-Dub!

Let’s see what Damien thought of this movie: 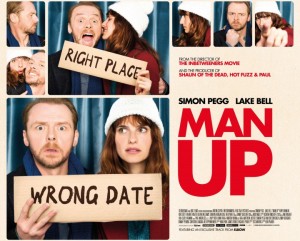 Director: Ben Palmer. Known for: “The In Betweeners.”

Top Billed Cast: Simon Pegg, known well for “Shaun of the Dead” and many more films, Lake Bell, known for “In a World,” and Olivia Williams, known for “An Education” and “The Sixth Sense.”

Brief Synopsis: Jack makes plans with an online dating interest to meet in person. Plans are fuddled and a different girl, Nancy, impersonates the online dating woman in the rendezvous. What results is the comedy and drama of the film.

My Word to the Wise: Simon Pegg has become synonymous with award-worthy British humor. There’s enough of that along with romantic comedy that at times, despite questionable casting chemistry, does actually work. This is a fun date movie to be sure but don’t expect something amazing.

The rest of this review may contain spoilers.

Simon Pegg has become a powerful presence in films. I found myself questioning if a character played by Lake Bell would in real life have interest a character played by the lead actor. We come to find that despite her youthful age and vivacity, Lake Bell’s character is in fact a bit dishonest and as a result unlikable. The question in my mind was whether this goofy big brother-type could be the love interest of the girl.

There’s a lot of romantic comedy material in this: the all night bar hop, the visiting the parents, etc. For that reason, it had my wife interested. I’d say the last 1/3 disappointed me. It didn’t wrap up the way it started. Still, no rom-com films have perfect plots, we just need them to snuggle and such. This one’s definitely a good snuggle film. Because the writing as a bit unfocused, especially at the end, it lost posts with me as a romantic comedy. As a drama, I’d say it fails substantially more. Dramas have to seem real, rom-coms don’t.