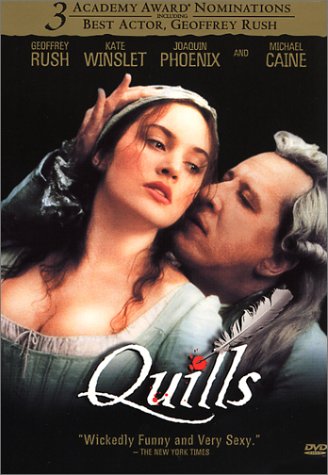 This review is part of the Monthly ABC Film Challenge over at Movie Reviews 101.  This month’s theme is Biographical Films.

“Why should I love God? He strung up his only son like a side of veal. I shudder to think what he’d do to me.” – Marquis de Sade

Brief Synopsis – In the dark days of the Napoleonic Era, the Marquis De Sade is imprisoned in an insane asylum run by a priest and tries to keep his sanity by writing very graphic novels about human interactions.

My Take on it – This is a film that I heard about when it came out and never had any real desire to see what it was about.

Geoffrey Rush was nominated for an Oscar for playing the lead role and he does an exceptional job with it in order to make us believe that his character is truly tottering on the edge between sanity and insanity.

His performance is quite impressive especially since he is able to help keep things a bit more clear in a plot that spirals downward due to the way things are presented.

The overall storyline of the film isn’t as good tho and that hurts things a bit.

In the second half, they try to push the story through numerous twists and turns to a point where it gets a bit complex which takes so much away from the impressions left before hand an it causes the film to lose the freshness and innovative feel at that point which hurts things a lot.

The supporting cast is also quite talented, but Michael Caine, Kate Winslet and even Joaquin Phoenix can’t make their characters more memorable enough even if they still are able to hold their own in a story that keeps veering off the track every now and then along the way.

Bottom Line – Interesting idea that doesn’t work as well as one could hope. Rush is superb in the lead role and makes us believe that his character is truly on the edge between sanity and insanity. He plays the character quite impressively which helps make things a bit more coherent to watch unfold. The story twists itself deeper and deeper into a more complex tale and loses some of its innovation by the mid-way point which hurts things a bit. The rest of the cast is also quite good even if they aren’t as memorable as Rush is in his role.  Caine, Winslet and Phoenix all carry their own here even if the story veers off the track every now and again.

MovieRob’s Favorite Trivia – Every single line cut from the script made it into this movie They were written on de Sade’s clothing, the bed sheets, or in his prison cell at the end. (From IMDB)