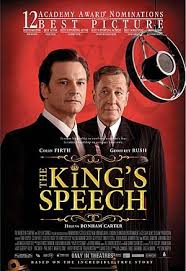 For this month’s next review for Genre Grandeur – Films about Royalty, here’s a review of The King’s Speech (2010) by Darren of Movie Reviews 101.

Thanks again to J-Dub of Dubsism for choosing this month’s genre.

Next month’s genre has been chosen by Emily of The Flapper Dame and we will be reviewing our favorite Wedding Movies.

Please get me your submissions by the 25th of June by sending them to emswedding@movierob.net

Try to think out of the box! Great choice Emily!

The King’s Speech is directed by Tom Hooper and stars Colin Firth, Geoffrey Rush and Helena Bonham Carter. The brief story follows King George VI who got an impromptu ascension to the throne of the British Empire in 1936 and the speech therapist who helped the unsure monarch overcome his stammer.

The story starts with Prince George (Firth) is given his first radio appointment, the problem comes when he struggles to get the words out, his wife Elizabeth (Carter) tries to see the doctors around London to help with stammer without any success. The last resort is Lionel Logue (Rush) an unconventional doctor that pushes George through a personal mission to figure out just what caused the problem in the first place. George is about to have his life changed, when his older brother Edward VIII (Pearce) is about to break royal protocol by marrying a divorced woman. This would put George on the throne, needing to get to the bottom of his stammer with the unlikeliest of friendships.

This was the Best Picture winner in the 2011, it also won Best Actor for Colin Firth, Best Director Tom Hooper and Best Writer David Seidler. It is talked about as one of the weaker Best Picture winners, beating out The Social Network, Inception, True Grit, The Fighter and Black Swam to mention the most popular contenders.

For me this is the best picture for the year of release, it fills in a massive stage in history for the royal family, it wasn’t just about King George VI becoming King, it was about how the royal family must learn to adapt with the technology advances in the world, with radio giving them a chance to communicate with their whole country instead of just the ones in front of him. It does show us how the current Queen Elizabeth II’s father was left in an uncomfortable position, happy to lead the country, wanting to avoid the public speaking. It is a man in history that will forever be known as one of the most reluctant kings of England.

The performances through the film are fantastic and Colin Firth firmly deserved his Best Actor victory, Geoffrey Rush is on a par with him and just shines through each scene, even bringing a laugh along the way too. Helena Bonham Carter is equally as good as we get to see her return to the royal family role in the latest season of The Crown. We must also give a mention to the sets and costumes which look stunning taking us into the world we are travelling through effortlessly.