This is the second of two posts dedicated to The Rosalind Russell Blogathon being held over at In The Good Old Days of Hollywood. 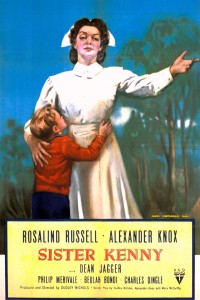 “Whatever you do, whatever happens, remember the people are more important than the system. That’s true in government, they’re fighting a war to prove it. And it’s true in medicine. You’ve got that fight left Elizabeth. It’s a big fight, it wont be easy, I wish I could help you. ” – Dr. McDonnell

Brief Synopsis – A nurse in Australia discovers a new treatment for polio that seems to work, but faces must opposition by the medical world.

My Take on it – This is a film that I had never heard of before choosing it to watch and review for this blogathon all about Rosalind Russell and her career.

She is superb here in the title role and is able to find a way to hold up the entire story all by herself from start to finish.

She is able to create a character that proves that if one strengthens their resolve and perseveres even for many years, just about any goal is within reach no matter what kind of fierce opposition is out there.

I found it quite interesting to watch the story unfold especially since this came out in the decade before Dr. Jonas Salk discovered the vaccination for Polio.

The story is enhances by this knowledge and it always feels regrettable that these characters aren’t aware of how close they truly are to a cure for this crippling disease.

Besides the way that the character of Sister Kenny herself is developed, most of the other characters feel like caricatures but that is usually what one can expect from a biopic like this which wishes to highlight the successes of its main charcters.

They are able to tell this story quite effectively an despite the story spanning many years, it doesn’t feel as if they skipped over aspects of the story to save time.

For her work in this film, Russell was very deservingly nominated for an Oscar for Best Actress.

Bottom Line – Russell is superb in the lead role and manages to hold this story up so well from start to finish.  She is able to show how it is possible to achieve just about anything is you just persevere no matter the opposition.  Interesting how this film was made before the Polio vaccination was discovered by Salk, so having that information enhances the work of the characters in the story towards that eventual goal.  Besides the main character, none of the other characters are developed well enough but that usually is par for the course in films where they want to help accentuate the main character.  The story is told quite well and doesn’t feel as if it skips over too much of the true events even though it spans so many years of the career and life of this famous nurse. Russell was very deservingly nominated for an Oscar for her work here as Lead Actress. Recommended!

MovieRob’s Favorite Trivia – The Wikipedia article on Elizabeth Kenny lists notable individuals who had been polio patients of Sister Kenny. Among those listed are Alan Alda, Dinah Shore and “Rosalind Russell’s nephew.” It is known that Rosalind Russell had campaigned long to portray Sister Kenny in film. Her nephew’s treatment may have been a factor in that interest. (From IMDB)