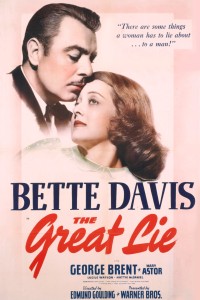 “It spells life with capital letters. A woman without a child is like a man without an arm. The right arm.” – Dr. Ferguson

Brief Synopsis – After her husband dies in a plane crash, a young woman discovers that his former girlfriend is pregnant with his child.

My Take on it – This is another film that I never heard of before coming across it in my quest to watch all films featuring Oscar nominated performances.

This film has a great story that was limited when this was made due to the strict censors of the time so many ideas are just alluded to instead of spoken about directly.

The story works here largely due to the great chemistry between the three leads who make us truly believe this love triangle between them.

Bette Davis, George Brent and Mary Astor are all wonderful in these role and make the plot work so much better because they manage to endear us to their characters so easily.

Astor was nominated for and won and Oscar as Best Supporting Actress for her work here and this was quite deserved because of the exceptional job she does with the emotions of her character.

The way that they have these two women choose to work together is played out in a very genuine fashion which adds so much to the realism of it all because we can clearly see that each of them is only making the choice based on what they are seeking out of life.

As things play out, we get to feel the inner conflicts that these character encounter as they try to find the right path through their conscious.

Bottom Line – Great story that works largely due to the great chemistry between the three leads. Davis, Brent and Astor are all exceptional here and make us believe this kind of love triangle. The way that the two women choose to work together also seems quite genuine because each is making the choice about what they truly want in life. The story is played out in such a way that it really helps us to be endeared to these characters and we can feel their inner conflicts with all of the decisions that they choose to make. Astor deservingly won an Oscar for her work on this film as Best Supporting Actress because she gives such a powerful performance here. Recommended

MovieRob’s Favorite Trivia – At Mary Astor’s suggestion, her hair was cut into the chignon shape she wears in the film because rolling and styling it took too long. She then wore it the same but a bit longer in The Maltese Falcon (1941), causing a fashion craze. (From IMDB)