Tnx for letting me partake Guys!

“When I was little, I used to walk around the neighborhood at night… and looked into windows of families from televisions… brothers, sisters, parents… eating, you know, talking. And I knew I couldn’t have that, but… just watching them, somehow, made me feel like I was part of it. Seeing all these families is sweet.” – Juliet

Brief Synopsis – After a bad breakup, a doctor rents an apartment and soon discovers that she is being stalked by an unknown person.

My Take on it – Last year I chose not to participate in this blogathon because I am not a fan of horror, but both Barry and Gill convinced me that there are enough films to choose from that its possible to find non-horrors and that’s just what I did by choosing three thrillers to watch and review.

This is a film that I chose because I’ve always been a fan of the two leads; Hilary Swank and Jeffrey Dean Morgan.

Unfortunately, this film’s premise is quite silly and is a very poorly made pseudo thriller.

It fails to be engaging, thrilling or suspenseful in any way and that makes it quite a chore to get through.

Swank and Morgan along with Christopher Lee are all wasted here since their roles all feel very generic and stereotypical and don’t manage to stand out at all in this mess.

They have all given much better performances over the years and I wonder why they chose to be a part of this film.

The story itself has been done so many other times before more successfully and this time they never make much of an impact with what they are trying to do.

This was a real waste of time.

Bottom Line – Really boring and silly pseudo thriller that fails to be thrilling suspenseful and even engaging. Swank, Morgan and even Lee are wasted here in these roles that seem much too generic and stereotypical. The story doesn’t feel unique in any way and seems to rehash too many other films of this genre without making much of an impact. Complete waste of time.

MovieRob’s Favorite Trivia – This was Christopher Lee’s first Hammer film since To the Devil a Daughter (1976) 35 years earlier. It was also his final Hammer film before his death on June 7, 2015 at the age of 93. (From IMDB) 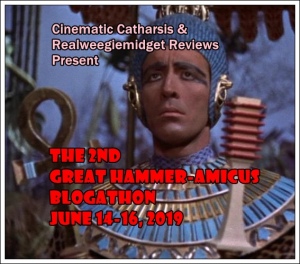