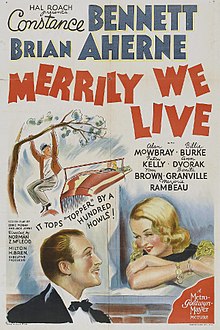 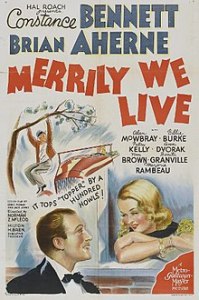 “[Introducing the two Great Danes] How do you do? I’d like you to meet my dogs. This dog’s name is “Get Off The Rug.” His name is “You, Too!”” – Marian Kilbourne

Brief Synopsis – A socialite who takes in homeless people to work in her mansion comes across a seemingly homeless man who arrives at her doorstep and is taken in as a new chauffeur.

My Take on it – This is yet another film that I knew nothing about or even heard of before coming across it as a film that was able to garner an Oscar nomination for one of it’s actors in my quest to watch all films with this distinction.

This is an extremely boring comedy of errors that doesn’t manage to work on any level.

The characters presented are all pretty silly and despite the fact that this film is meant as a story with a social commentary, it fails at being interesting in any way.

This was probably much more enjoyable when it came out, but in the 81+ years since then, it’s easy to see that this film hasn’t aged well at all.

The cast is much too quirky and the way things move along is laughable instead of impactful or poignant like it was meant to be.

Billy Burke was somehow nominated for an Oscar for Best Supporting Actress for her work here, but like the rest of the cast,her performance is far from perfect and doesn’t help make this film any more enjoyable or entertaining.

Bottom Line – Extremely boring comedy of errors that doesn’t work at all. The characters are all quite silly and nothing in the storyline works as social commentary like they attempt.  This film probably was much more entertaining when it came out, but it doesn’t age well at all. The cast is too quirky here and things are seen as being silly instead of impactful or poignant. Burke was somehow nominated for an Oscar for Best Supporting Actress for her work here, but she like the rest of the cast are far from perfect in making this film entertaining enough.

MovieRob’s Favorite Trivia – Alan Mowbray, Billie Burke, and Constance Bennett had worked on director Norman Z. McLeod’s previous film, Topper (1937). The commercial and critical success of Topper played a large role in their inclusion in this film. (From IMDB)