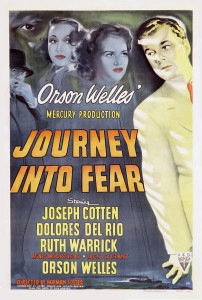 “[standing at the ship’s railing, looking into the distance] To see the land from a ship, or to see a ship from the land, I used to like both. Now I dislike both. When a man reaches my age, he grows, I think, to resent subconsciously the movement of everything except the respiratory muscles which keep him alive. Movement is change. And to an old man, change means death.” – Prof. Haller

Brief Synopsis – An American engineer in Turkey thinks he’s being followed by a German spy who is trying to murder him.

My Take on it – As a fan of Orson Welles and Joseph Cotten, I was excited to find this title since I had never heard of it beforehand.

They do a wonderful job here keeping the story thrilling and use the political situation surrounding the impending World War II with Germany as a great backdrop for the story.

Cotten is superb in the lead and his narration really helps keep the story focused throughout.

He s able to once again show how great an actor he can be with the right material.

The fact that he adapted the script himself also says so much about him.

Welles is also great here even if he plays a relatively small yet very significant role.

The pacing of the story works really well and something is constantly happening which raises the level of suspense.

The claustrophobic feeling of this story also helps add to the suspense as the viewer feels things closing in more and more as the story unfolds.

The run time is actually quite short but they use it to their advantage here by allowing the story to never feel as if it is being stretched out which helps give the viewer maximum enjoyment of things as the plot slowly begins to thicken more and more as the story moves along.

Bottom Line – Great suspense thriller that uses the political situation during World War II era really well.  Cotten is excellent in the lead and the film allows him to show how great an actor he can be. Welles is also great in a small yet significant role.  The story moves along at a great pace and things are kept quite suspenseful throughout. Great claustrophobic feel throughout adds so much to the suspense of it all. The short run time also helps because the story never feels as if it is being stretched out and gives us maximum enjoyment as the plot thickens along the way.  Highly Recommended!

MovieRob’s Favorite Trivia – In late August 1942, RKO decided to delay the release of the movie because critics disliked it in press previews. By that time, Orson Welles’ contract was terminated by a new studio head. As part of the settlement, Welles agreed to edit the last reel, and film additional scenes. He added the voice-over by Joseph Cotten throughout the movie, and designed the sequence before the credits. (From IMDB)