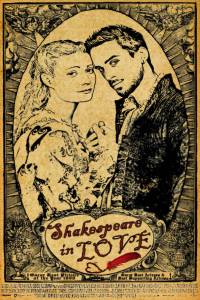 “Playwrights teach us nothing about love. They make it pretty, they make it comical, or they make it lust, but they cannot make it true.” – Queen Elizabeth

Brief Synopsis – Young play-write Will Shakespeare is plagued with writer’s block and must try and find a muse for his latest play about star crossed lovers.

My Take on it – This is a film that I recall seeing in theater not long after it came out and have been enthralled by it ever since.

They are able to utilizes many methods to keep this story working and remaining enjoyable and entertaining throughout.

The way that the story is built up works really well since they make the presumption that entertainment world was run back in the 16th Century just as things are run today and that adds so much to the humor of the story.

This actually also helps the viewer relate much easier to everything going on in the story because it feels quite familiar.

The love story aspect of this film works fine but they don;t manage to convince the viewer that the love between the two main characters is anything more than lust or a fleeting romance that will never be able to sustain.

The acting is great with Gwenyth Paltrow, Joseph Fiennes, Judy Dench and Geoffrey Rush helping to keep this so enjoyable along the way.

Paltrow and Dench both won Oscars for their work here (Actress and Supporting Actress) and the were both quite deserving of these awards even if Paltrow’s performance isn’t as powerful as one might hope.

Dench steals every scene she is in as Queen Elizabeth I and despite her small screen-time, she stands out in her performance and was very deserving of her Oscar.

Unfortunately, if one is unfamiliar with Shakespeare or his famous play about star crossed lovers, many of the jokes and references will fall quite short.

This movie won 7 Oscars and 6 of them were very deserving.

Unfortunately, its win for Best Picture that year still baffles me and remains one of the biggest mistakes in Oscar history when this film somehow won the top award over Steven Spielberg’s epic Saving Private Ryan (1998).

Bottom Line – Great film that utilizes so many methods that helps keep this entertaining throughout. The story is built up really well and I love the way that they presumed that plays were run back in Old England just as they are now. That premise adds much humor to the film and helps the viewer relate even more to the story. The love story aspect of this film is fine, but it’s hard to actually believe the connection between the two main characters is anything more than lust.  Dench was very deserving of her Oscar win for Best Supporting Actress for her performance in this film. Paltrow also won an Oscar for her work here as Best Actress and its understandable why she was able to win for this role even if she doesn’t give such a powerful of a performance as one might expect.  If one is unfamiliar with Shakespeare or his most notable work, many of the references and jokes might fall a bit short tho. This film won 7 Oscars and 6 of them were very deserving.  I’m still baffled after more than 2 decades about the fact that this film somehow outmaneuvered Saving Private Ryan (1998) and took home Best Picture.  Recommended!