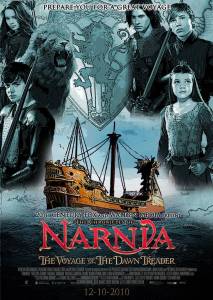 Brief Synopsis – The two younger Pevensie children return to Narnia along with their cousin Eustace in order to help Caspian travel across the seas in order to find seven Lords of Narnia who were banished years earlier.

My Take on it – As with most people in my generation, I read most of the books in the Narnia series as a kid, but I must admit that after 3+ decades, I no longer recall much of the specific details about the stories in the 7 books of the series yet still recall the overall story lines.

This movie is a great addition to the Narnia trilogy because it is able to expand even further on the plots from the previous two chapters without the need to spend excessive time on developing the characters and the world of Narnia.

The story keeps things quite enjoyable and entertaining especially since it shows us even more of the fantasy world of Narnia than we saw before.

The various places that the characters end up going are vastly different and give us so much more insight into the magic and the fact that nothing is ever as it seem sin this magical world.

The new characters introduced to us are great and I especially enjoyed Eustace since his personality adds so much more fun and freshness to the enjoyment of the story.

Caspian’s character is presented even better in this film since he is much more established as the monarch which makes him more decisive in his decisions along the way.

As with all of the films in this series, the special effects are superbly done and are able to enhance the story by making the magical world of Narnia much more tangible and realistic.

IMHO, this film is the best of the trilogy especially because it rarely feels as if things have been toned down like the previous two stories and also presents us with such a fun adventure story.

Unfortunately, this film was the final one made in the series despite the fact that there has been recent news that they might be continuing the stories in the near future.

Bottom Line – Great addition to the trilogy. The story remains quite enjoyable and entertaining especially due to the way that they show us many new areas of this fantasy word where nothing is ever as it seems. The introduction of new characters is also great and Eustace is a fun and fresh addition that enhances the enjoyment of the story.  Caspian is even better in this film than in the past since he has come of age and is much more decisive in all that he does. Once again, the special effects work really well in enhancing this film’s story line and makes the fantasy world of Narnia feel even more tangible. This is the best film of the trilogy IMHO especially since it doesn’t feel as toned down as the others do and is able to give us a very entertaining adventure story. Unfortunately this was the final film made in the series, yet there is recent hope that perhaps the stories will continue in the near future. Recommended!

MovieRob’s Favorite Trivia – When the main characters are all sitting looking at the stars and comment that they have never seen those constellations before, Aslan’s face can be seen in the stars. (From IMDB)