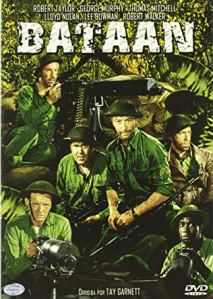 “Come on, suckers! What’s the matter with you? What are you waitin’ for? Didn’t think we were here, did you? You dirty rotten rats! We’re still here! We’ll always be here! Why don’t you come and get it? ” – Sgt. Bill Dane

Brief Synopsis – A group of mismatched soldiers band together to defend the island of Bataan from the onslaught of Japanese troops during the early days of World war II.

My Take on it – This is a film that I heard about years ago, yet never had the chance to see what it was all about until now.

It’s a pretty generic war film that attempts to show how the diversity of soldiers banding together against a common cause is important.

The characters in the film all seem like caricatures and stereotypes and none are really developed well at all for us to care about one or another.

This is used to help emphasize the importance of everyone fighting together against the enemy no matter who you are and what your particular background is.

This film was probably received much better at the time due to the fact that it was used for wartime propaganda.

The story moves along in a strange way and loses much of its plausibility along the path that they chose to use.

I’m sure tho, that this film was quite successful at the time in helping to rally the people in the fight against Fascism.

Bottom Line – Very generic war film that tries to show the diversity of the brave men who were left to defend posts during the early days of the war. The characters all feel very much like caricatures and each fits a different kind of stereotype which helps to emphasize that even with their differences, they needed to work and fight alongside one another against the enemy. This film feels like more wartime propaganda and the way things move along loses some of its plausibility but I’m sure it was successful at the time in motivating everyone in the fight against Fascism.

MovieRob’s Favorite Trivia – This is one of few contemporary World War II films to feature an American soldier who was an African-American. As such, the movie was not shown in parts of the American South. The book “The Films of World War II” notes that producer Dore Schary said that letters of complaint were received by the studio. (From IMDB)