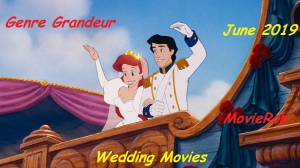 For this month’s next review for Genre Grandeur – Wedding Movies, here’s a review of The Hangover (2009) by me.

Brief Synopsis – A group of friends in Las Vegas for a bachelor party weekend wake up the morning after with no recollection of what happened to them or where the groom has disappeared to.

My Take on it – This is another film that was an easy choice for this genre because it is able to mix in so much humor to the typical situation of a bachelor party gone wrong.

This film is able to do some amazing things as its story unfolds.

The choice to keep most of what happened during the night no one can remember a secret until the credits was a wise choice since it allows us to try and piece things together along with the characters especially when both sides don;t know what is true and what is not which adds so much more to the mystery along the way.

The cast of this film is amazing and each of them helps keep the story feeling fresh and uniquely funny the whole time because they are all so very different both in their marital status and in their outlooks on life in general.

This helps keep things so mysterious and fun as they attempt to try and solve this mystery on their own.

The story is filled with lots and lots of surprises along the way that are quite welcome since they are each able to constantly raise the level of humor in the story so that we can burst out laughing the whole time.

The supporting cast of the film is also great and they help keep things thrilling and mysterious because each of them holds a small piece to the overall puzzle of what happened, yet the story still leaves so much unknown until the end credits which helps explain so, even if not all, of what transpired.

Bottom Line – Excellent comedy that does so amazing things along the way. The choice to keep things hidden from us and from the characters until the end credits is genius because it keeps us guessing the whole way through.  Amazing cast helps keep this film feeling fresh and funny the whole time because they are all quite diverse and each is able to bring a different kind of personality to each of the stops along their quest to find the groom and piece together their blanked out memory of the previous night’s experience.  Each of them has a different marital status which also helps give us diverse opinions on how to deal with everything that happens to them. The story is filled with surprises along the way which are quite welcome because they are each able to constantly raise the level of humor here so that we get into an uncontrollable laughter. The supporting cast also helps keep things thrilling and mysterious because each of them holds a piece to the puzzle that the characters are trying to solve yet so much of the story is left to the imagination even after the credits.

MovieRob’s Favorite Trivia – Mike Tyson revealed that he appeared in the film to fund his drug habit, and that he was high on cocaine when he filmed his scenes. Tyson later said that working on the film convinced him to change his lifestyle. (From IMDB)