For this month’s next review for Genre Grandeur – Wedding Movies, here’s a review of The Wedding Singer (1998) by Debra of Moon in Gemini.

Let’s see what Debra thought of this movie: 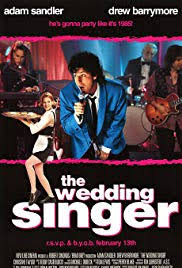 The Wedding Singer was Drew Barrymore’s first of three onscreen pairings with comedian Adam Sandler. Set in 1985 New Jersey, it concerns one Robbie Hart (Sandler) who once had dreams of conquering the rock music world with his band. Instead, he has ended up working as a wedding singer. Jilted at the last minute by his fiancée, Linda (Angela Featherstone), Robbie goes into such a deep depression he starts singing “Love Stinks” at wedding receptions. Unable to book weddings, he ends up working other affairs, such as bar mitzvahs.

At these events, he meets Julia (Barrymore), a waitress who is engaged to a successful go-getter named Glenn (Matthew Glave). Since he knows all the wedding vendors in town, he helps Julia get good deals for her flowers, cakes, and chauffer. Julia fixes him up with her sexy sister Holly (Christine Taylor). During a double date with Glenn and Julia, Glenn brags to Robbie about his unfaithfulness to Julia. Robbie realizes he’s in love with Julia, but thinks Julia is really in love with Glenn, when she is actually beginning to fall for Robbie.

After finding the suddenly-returned Linda at Robbie’s place, Julia decides to elope with Glenn. Robbie follows them to Las Vegas so he can confess his love to her in time. Ending up on the same plane with Glenn and Julia, Robbie receives help from the first-class passengers (including rock star Billy Idol!) so he can woo her with a song he wrote for her.

An irate Billy Idol fan helps the plane’s stewards lock Glenn in a lavatory while Robbie serenades Julia. They tell each other they love each other. Billy Idol promises to tell people in the business about Robbie’s songwriting ability. Julia and Robbie marry and, presumably, live happily ever after.

It’s an absurdly simple plot that hits many familiar romantic comedy tropes. The main characters are in love with people not worthy of them until they meet each other. Misunderstandings and mishaps ensue, until they can finally get together.

No, The Wedding Singer doesn’t offer anything particularly different in the romantic comedy genre, as far as plot. But I love it. In fact, if I were making a list, it would easily land in my top five favorite romantic comedies of the last 30 years.

The reason is simple: the endearing chemistry between Barrymore and Sandler.

Too often in romantic comedies, there’s a feeling the main couple has to get together simply because the story demands it.

Barrymore, who has been entrancing audiences since she was a child, has also gone through dark times since a young age. She possesses a sweetness tempered with an edge that meshes perfectly with Sandler’s “nice Jewish boy with hidden deep anger” persona.

I think what also enhances their chemistry is the 1980s New Jersey setting. In spite of the over-the-top nature of many Adam Sandler movies, this is a case of a nostalgia movie that keeps a fairly light touch. Which was a wise choice, because you don’t have to go very far to make the 1980s seem over-the-top, as that’s exactly the kind of decade it was.

(It really was. Think about it. This movie was set only 13 years before it was made. Now imagine a movie made today set in 2002.)

Sure, the big hair is there (check), music of the era (check), references to newfangled technology such as CDs (check), a DeLorean (check), the Madonna and Miami Vice-inspired clothing (check) a character obsessed with Boy George (check), and acknowledgement of the decade’s money-crazed attitude (check).

Barrymore’s and Sandler’s characters, however, are a huge contrast to the typical characters you find in 1980s movies. Robbie is so kind hearted, he gives an old lady singing lessons and allows her to pay him in meatballs. (One of my favorite scenes is when he goes to a bank to apply for a job and thinks all he has to do to land it is talk about how much he loves money.)

I think there was a deliberate choice to dress Julia more as an early 90s woman, someone who maybe heard Nirvana the first time and immediately moved to Seattle. She doesn’t have the big hair. Even her wedding dress is off for the era: it’s very basic and has short, simple sleeves.

No self-respecting 1980s Jersey bride would have been caught dead in a gown that didn’t have massive lace and blinged-out sleeves.

Some of the most hilarious scenes are when Robbie sings, starting with the opening featuring his “wedding singer” cover of “You Spin Me Round (Like a Record).” Later, he sings to Julia a song he wrote after Linda left him, which starts out sad and gentle, then switches to yelled insults. “I just want to warn you, I was listening to The Cure a lot,” says Robbie as an introduction to the song.

I love Barrymore’s reactions, so determined to say something positive, and she does, because the character likes him. A different actress might have been tempted to have the character roll her eyes just a little. That she doesn’t do this is a big reason why I buy into the pairing.

Yeah, I grin like a fool every time Robbie sings “Grow Old With You” and he and Julia say they love each other. Unlike many romantic comedies, this movie makes me believe these characters really are growing old together.