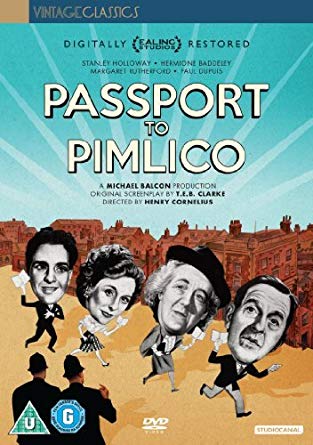 Brief Synopsis – After a hidden room is uncovered with treasures and a deed to it’s freedom from England, the small town of Pimlico is declared its own sovereign nation.

My Take on it –  This is a really funny film that knows how to take a political situation and stretch it out while still giving us al that it’s worth.

This film is able to show the effects of war on a small town after they are informed that they are now a new sovereign country.

This film obviously ends up taking the various situations presented to extreme lengths, but they definitely know what they are doing when the present things in a way that we get to see what kind of needs a new nation has and where they can expect to get that aid from.

Stanley Halloway stands out here in the lead role as the leader of this new country and learns quickly how to deal with these new problems that they are faced with in succint and forceful way.

The film manages to pepper in so many great jobs which are quite funny.

These jokes range in so many various topics including: politics, royalty, the recently ended war, poverty and the obvious need to find a bit of passion and forethought along that journey.

This film is quite reminiscent of The Mouse That Roared (1959) which came out a decade later.

Bottom Line – Great farce that tries to show the effects of war on smaller communities within the British realm. This story obviously takes things to the extreme, but the way they present the various aspects of the story line and the problems between this small new nation and Britain works really well. Halloway stands out as the leader of the new country that must try and find a way to deal with their problems in a succint and forceful way.  The jokes are quite funny and they manage to mix together politics, royalty, the war, poverty and ultimately the need for compassion along the way. Recommended!

MovieRob’s Favorite Trivia – Inspired the likes of The Mouse That Roared (1959) and its sequel The Mouse on the Moon (1963) about ridiculously small independent nations, as well as the Swedish radio show “Mosebacke Monarki”. A similar plot was the basis of the German film Die Dubrow Krise (1969) that depicts a fictional East German town joining West Germany. Many problems that eventually plagued the actual reunification 20 years later were accurately predicted by the film. (From IMDB)