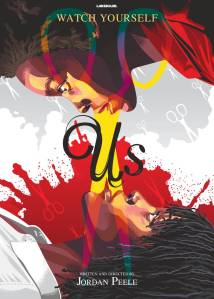 “If you wanna get crazy, we can get crazy! ” – Gabe Winston

Brief Synopsis – A family traveling to a summer getaway are confronted by doppelgangers of themselves who try to kill them.

My Take on it – I have never been a fan of horror movies and always do my best to try and avoid films in that genre.

After seeing Get Out (2017) two years ago, I was able to see the kind of potential that writer/director Jordan Peele has with these kind of films.

Lupita Nyong’o is great in the lead and is able to play the dual roles really well and makes us believe both personas as they try to outwit one another.

The way that his films mix together comedy with drama and thrills works quite well and adds a whole new level to things.

The story itself starts off like a normal slasher film and then moves along into unique territory when it constantly begins to throw out a few nice surprises along the way that help make the story deeper and more meaningful.

The direction of the story keeps changing directions which also helps make things that much more satisfying.

Bottom Line – Despite not being a big fan of horror movies, I like the way that this film plays out.  After Get Out (2017),  Peele, once again shows us that he is able to make horror films that are a mix between comedy and drama.  Nyong’o is great in the lead role and is able to play the dual roles really well as they each try to outwit one another along the way. The story seems to move along like most slasher films and then they throw out a few nice surprises along the way that manage to change the direction of things and make things even more satisfying. Can’t wait to see what else Peele has in store for us in the future.  Recommended!