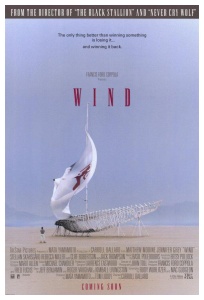 “Well, don’t worry about it. I mean, what could happen? Of course, my design could have a few flaws. And after a few weeks, Will and I discover we hate each other. Abigail proves to be the flake of the century; she can’t raise a dime. A giant sandstorm comes along, knocks this place over, we go broke, the IRS throws us in jail. The State Department wants to throw me out of the country. But I fool them: in jail, I catch pneumonia and die.” – Joe

Brief Synopsis – A professional sailor joins an elite team of racers to try and win the most prestigious sailing race in the world.

My Take on it – This is a film that I recall hearing about when it came out yet never had much of a desire to try and see what it was all about.

Despite the fact that this film deals primarily with a boat race, it moves extremely slowly and comes across as being quite boring throughout.

The story moves in awkward ways and the end result is horrendous to try and get through.

Matthew Modine and Jennifer Grey are both superb actors yet neither is used well here and the fact that they have terrible chemistry with one another also hinders the enjoyment of this film so much.

It’s quite difficult to believe that these two characters are a realistic romantic couple or even that they could be teammates in the race.

The story focuses largely on the sport of sailing yet fails to really give much of an explanation as to the rules and regulations of the sport for those unfamiliar with it.

This fact makes the film even more boring to watch since it’s quite difficult to watch a story unfold without a proper explanation of how these races actually work.

Complete waste of talent here including Cliff Robertson in a small yet significant role.

Bottom Line – Terrible film that was so boring to try and get through. Modine and Grey have horrendous chemistry together and it’s hard to believe them as a couple or even as teammates. The story focuses on the sport of sailing yet fails to explain much about the sport to those unfamiliar with it and that helps make the story feel even more boring because it’s difficult to actually follow and understand everything going on during the races themselves.   Complete waste of talent!

MovieRob’s Favorite Trivia – Jennifer Grey had her nose surgically altered after the film wrapped. When several shots needed to be re-taken, you can see an obvious change in her appearance. (From IMDB)