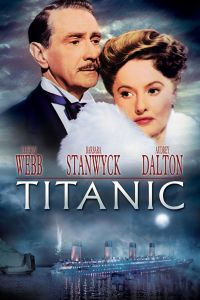 Brief Synopsis – A man races to get aboard the ill-fated Titanic in order to stop his wife from traveling to America with their two children.

My Take on it – As a HUGE fan of Titanic (1997), I was quite interested in seeing how this film would depict similar events.

They actually manage to tell the story quite well especially given the amount of information that was available at the time about the sinking of the ill fated ship.

They do a great job here spending time developing the key characters of the story and make them feel very real which is important in such a story since it gives the viewer reason to care about them and what will eventually happen to them once the eventual tragedy strikes.

The various story lines are all quite diverse and allow us to get a much better picture of the kinds of people who were on this tragic voyage.

The love story aspect also works even if it isn’t the main focus of the story.

It great seeing how James Cameron was able to use parts of this story for his epic feature on the same subject and it’s quite funny to hear some of the same dialogue by different characters or scenarios played out in the same way.

These moments actually add so much to the feeling of accuracy in the way the story is depicted even if it’s all really based on fiction.

This is a movie that looks at this disaster from a very human perspective and deals more with the characters than the tragedy itself.

There are some very poignant moments peppered throughout which give even more impact to things.

The cast of this film is quite good and Thelma Ritter stands out among the rest as a fictionalized version of Molly Brown.

Bottom Line – Great depiction of the ill fated voyage that works quite well especially given the information known at the time this was made. It is clear that Cameron used parts of this story for his own epic, and that helps add to the feeling that this is an accurate depiction of the maiden voyage of Titanic. The film does a nice job spending a lot of time developing the various characters which allows us to care about them even more when tragedy eventually strikes. This is a film that deals with the human drama more than the disaster itself and that works well on numerous levels.  The cast is quite good here and Ritter stands out among the rest as a fictionalized version of Molly Brown.  Recommended!

MovieRob’s Favorite Trivia – During the boarding of the lifeboats, Norman changes seats with a woman who arrives at the last moment when the boat was completely full. This was inspired by the action of a Mexican passenger in first class named Manuel Uruchurtu, who did the same thing to a woman from second class who was refused a seat on the lifeboat. After he gave up his seat to her, he asked her to travel to Mexico, if she survived, and tell his wife what happened. His body was never found. (From IMDB)