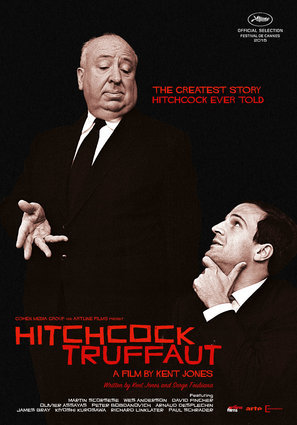 Brief Synopsis – Documentary about the meeting between these two Film icons and how it affected both of their work along with the work of so many filmmakers ever since.

My Take on it – This is another documentary that I became aware of due to an article by my friend Jane from 500 Days of Film.

Just the idea of this film fascinated me because I’ve seen all of Alfred Hitchcock’s films and some of Truffaut’s and was curious to find out about the conversations that these two movie giants engaged in when they were both at their peaks.

The two of them became close friends due to their shared love for movies.

This is a film that gives us the opportunity to peak inside the minds of these great film giants via their various conversations and correspondence over the years.

We get to see how they pertain to numerous films that each of them made over the course of their careers.

This film also allows us to learn so much about how their work affected and influenced the future via interviews with some of the best directors who were motivated or inspired by the films of these men.

As a film lover, this is a film that is a must watch because it is able to be so informative even for those of us (like me) who love film yet know practically nothing about the technical aspects of how movies are made.

Bottom Line – Excellent film that allows us to gain so much insight into the minds of these two iconic directors who became close friends due to their mutual love of film. This movie allows us to get a peak at many of their conversations and how they pertain to different films that each of them made during their careers. In addition, this movie allows us to learn so much about the after effects of these meeting via numerous world renowned directors who were motivated or inspired to join this profession due to the influence of these two movie giants. As a film lover, this is a must watch film because it is so informative even for those of us (like me) who know nothing about the technical aspects of a movie.  Highly Recommended!

MovieRob’s Favorite Trivia – Famous writer and screenwriter William Goldman feels that the book this film is about ruined Hitchcock as a filmmaker. He pointed out that it made Hitchcock self conscious and concerned with being an artist in a way that destroyed his ability to engage audiences and be the great director he had been up to that point. (From IMDB)