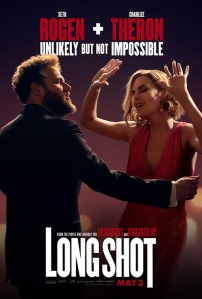 “[wearing traditional Swedish dress as a joke played at his expense] I look like Cap’n Crunch’s Grindr date.” – Fred Flarsky

Brief Synopsis – A journalist gets a job as a speechwriter for his former babysitter who is now Secretary of State with ambitions on reaching the White House.

My Take on it – As a fan of films dealing with American politics and the Presidency, I have been looking forward to seeing this movie ever since I first saw the trailer months ago.

They have an interesting premise yet fail to present it in an enjoyable way which hurts things immensely.

Seth Rogen and Charlize Theron are both talented actors, but the relationship posed between them seems so implausible since they have terrible chemistry together.

This movie largely fails due to the fact that they try too hard to toe the line between drama and comedy and in the end things are confusing because of it.

The jokes go much too far and aren’t as funny as they should be and the dramatic aspects of things come across as being so unbelievable because things get a bit too absurd along the way.

Loved the various pop culture references to the 80’s and 90’s in this film especially how they also include Boyz II Men in a fun cameo.

Bottom Line – Interesting idea that doesn’t work well enough due to the way they chose to present things. Rogen and Theron are both great actors but their chemistry in this film is very iffy and at points quite unbelievable. As a fan of movies involving politics and the Presidency, the story and plot is a bit disappointing for the genre because it tries too hard to toe the line between drama and comedy which quite unsuccessfully. The jokes go a bit too far and aren’t as funny as they could have been.  Great references to the 80’s and 90’s, but even a fun cameo by Boyz II Men doesn’t help make this more interesting to watch.

MovieRob’s Favorite Trivia – There are several discussions of it being rare for actors to successfully transition from TV to films. Seth Rogen himself did a very mild variation of this: his first role was in Freaks and Geeks. (From IMDB)