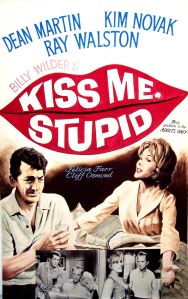 “If it weren’t for Venetian blinds, it’d be curtains for us… ” – Orville J. Spooner

Brief Synopsis – An aspiring musician fools a singer into staying in his town overnight in order to get him to hear his song, but he must find a way to keep his wife save from the womanizing crooner.

My Take on it – I have been a fan of Billy Wilder’s films for year and looked forwrad to seeing another one of his films that he wrote with his writing partner I.A.L. Diamond.

Unfortunately, this is not among their best films.

Ray Walston was a great actor, but he isn’t very good in this role because he isn’t able to play this part fluidly enough and things come across much too poorly.

This is especially true when one compares him to Wilder’s usual leading actor Jack Lemmon.

The script is a bit too loose and things get out of hand quite quickly.

The story remains too repetitious along the way which also hurts things because it doesn’t feel as original as one would think it could do to the way that it revolves around itself too often.

The cast of this movie is actually quite good, but most of them feel wasted here because they all seem too constrained the whole way through.

The dialogue written by Wilder-Diamond is presented really well and is done in a rapid style fashion.

It’s too bad that it just isn’t as memorable or enjoyable as many of their other collaborations.

The storyline is filled with lots of innuendo along the way which gets a bit too out of hand and turns silly.

The film is overlong and the two hour plus run time fails to really justify this kind of farce that goes too far in its attempt to be funny.

Bottom Line – Not among Wilder’s best films. Walston isn’t as fluid and fun in the lead as Lemmon was so often for Wilder. The script itself gets a bit out of hand fairly quickly and things feel too repetitious as the story unfolds. The cast is quite good, but they don’t seem to be constrained enough with their characters. The dialogue is presented in perfect Diamond-Wilder style yet in this case it just doesn’t work as well as some of the other films by this writing team.  The innuendo and storyline is bit too much because the long run time of over two hours doesn’t justify such a story and things go much too far along the way.

MovieRob’s Favorite Trivia – Crooner Dino is played by Dean Martin, in a role where he essentially is playing himself. Dino is asked at one point in the film what he thinks of the new rock group The Beatles, and he replies in a derogatory manner, with the script imitating Martin’s feelings about the band in real life. Dino is then told that they are the new sound and that Dino’s sound is obsolete. Ironically, and in reality, soon after the filming of this movie began, Martin recorded his soon-to-be signature song, “Everybody Loves Somebody Sometime,” which knocked The Beatles’ “A Hard Days’ Night” single from the Billboard #1 spot in August 1964, one month after filming wrapped on this movie. Martin therefore became the first easy-listening performer to achieve a #1 Billboard single after The Beatles arrived in America, and did this by usurping the Beatles themselves from the top chart position. (From IMDB)