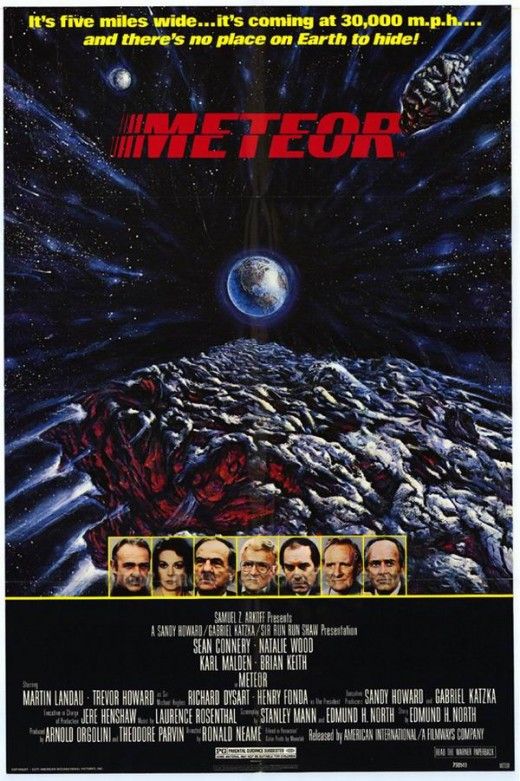 This month’s genre has been chosen by Barry of Cinematic Catharsis and we will be reviewing our favorite Nature Gone Berserk Movies.

Mother Nature usually takes care of us, with all the oxygen we can breathe, water we drink and cute bunnies we can pet, but what happens when she gets angry? Watch her unleash floods, earthquakes, volcanoes and animals gone mad.

Please get me your submissions by the 25th of Aug by sending them to berserkbarry@movierob.net

Try to think out of the box! Great choice Barry!

Let’s see if I felt that this movie would be worthy of being in the company of my others favorite movies in the genre of Nature Gone Berserk Movies.… 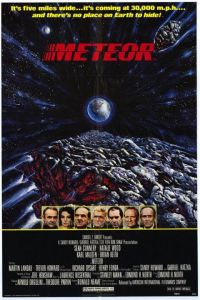 “Why don’t you xerox 100 copies of that report, pass them out among 100 guys in Washington and then organize 100 meetings to discuss it, and by that time the meteor will have hit and we won’t have any more problems! ” – Harry Sherwood

Brief Synopsis – As a meteor hurls through space on a path to hitting Earth, top scientists from the US and Russia must work together to try an stop this threat.

My Take on it – This is a disaster film that I came across by accident when looking for films for this months genre and the cast hooked me right away.

They find a way to make the story seem quite plausible especially during the height of the Cold War.

The cast of this film is quite good and that helps give us numerous locations of action for the story as things move along where it’s easy to follow the events of the film.

Sean Connery is great in the lead role here and we get the feeling that his character really has the ability and intelligence to try and stop the impending disaster.

The rest of the ensemble cast also help keep the story flowing with Karl Malden, Natalie Wood, Brian Keith, Martin Landau and Henry Fonda all contributing nicely to the story.

Given the fact that this film was made not long after the original Star Wars (1977), the special effects utilized here are pretty pathetic and that does take away from the impact of the film.

The fact that this film gives us the perspective of a disaster during the height of the Cold War works really well in adding more tension to the story.

Unlike the more famous modern films dealing with a similar premise like Armageddon (1998) and Deep Impact (1998), this movie shows this kind of event pretty much solely from the perspective of the scientists and policy makers instead of via the astronauts trying to stop things or via the average person on the street.

This allows for us to get a nice and coherent perspective on these kind of events.

Bottom Line – Disaster film that actually works quite well here. The cast is quite good and helps give us multiple locations of action as the story moves along. Connery is great in the lead and makes us believe his character truly has the ability to try and stop the impending disaster. The rest of the cast do nice work here also with Malden, Wood, Keith, Landau and Fonda all standing out. The special effects are a bit lame here and it’s hard to believe that this was made not long after Star Wars (1977) and that takes a bit away from the impact of this film.  Really enjoyed seeing the perspective of this kind of premise during the height of the Cold War where we get to see and feel the added tension of the times.  Unlike the two most famous modern films about this kind of premise Armageddon (1998) and Deep Impact (1998), this film focuses almost entirely on the scientists and policy makers instead of the astronauts trying to stop things and they present the story from their perspective in a very coherent way. Recommended!

MovieRob’s Favorite Trivia – Principal photography was shut down for two days when Sir Sean Connery contracted a respiratory condition during the filming of the mud sequence. The mud also knocked Connery off his feet, buried Karl Malden twice, while Natalie Wood was almost sucked into one of the pumps. During the mud filming, the actors and actresses would stuff their ears with cotton-wool, and had to have their eyes washed out, at the completion of each take. (From IMDB)

Genre Grandeur Worthy? – Comes close. Nice to see how they deal with this kind of premise during the Cold War.