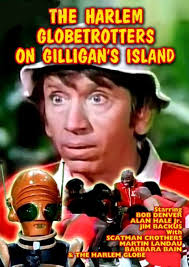 “Of course he did Gilligan. He made us all limited partners – only you’re a little more limited than the rest of us.” – The Skipper

Brief Synopsis – A rival of Thurston Howell tries to take control of the island after a new element is discovered in a cave.

My Take on it – This is the final TV movie about the castaways on Gilligan’s Island.

Unfortunately, it doesn’t manage to work at all and shows that they went a bit too far with things.

The idea of having the castaways working together with the Harlem Globetrotters in order to try and stop an evil businessman from taking control of the island due to the discovery of a new chemical element in a hidden cave.

The robots that the Globetrotters need to play basketball against are quite silly and hurts the film a lot since it doesn’t come across as being plausible enough.

The cast unfortunately begin to show their age in this movie and the fact that Jim Backus was no longer well enough to be in this film says so much about the chemistry of the original cast.

The choice to replace him with a younger version of his character who acts similarly and also has a similar speech pattern doesn’t work well enough since he seems to be missing something about his demeanor even if he is meant to be his son.

It’s sad to realize that this was the final time that the cast would get together but as they say – all good things must come to an end.

Bottom Line – Terrible sequel that doesn’t work at all. The idea of having the castaways work together with the Globetrotters against an evil businessman trying to take over the island which has a large supply of a new element is plain silly. The robots that the Globetrotters have to play basketball against don’t make things seem plausible enough and that hurts things even more.  The cast feels a bit too old for this story and the fact that they had to bring in a substitute for Backus’ character doesn’t work at all since he is suppose to be his son and has the same speech patterns but doesn’t have the same air to his ideas also is detrimental to the story line.  It’s sad that this was the final time that this cast got together, but all good things do sometimes need to come to an end.

MovieRob’s Favorite Trivia – At the time this movie was being made Jim Backus was suffering from Parkinson’s disease thus preventing him from being in the movie. Originally his character was written out of the storyline but at the last minute Backus felt well enough to make a small cameo at the end of the movie. (From IMDB)