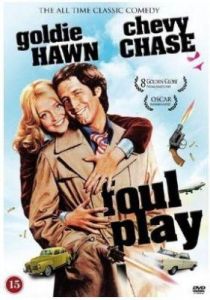 “Like that man told you in the movies last night, beware of the midgets. They’re taking over the world.” – Mr. Hennessey

Brief Synopsis – A young librarian is stalked by a group of assassins after she inadvertently receives evidence of an upcoming political assassination.

My Take on it – This is a film that I saw over a decade ago and didn’t recall much about what it was all about besides the two stars doing a fine job here.

This is a really fun pseudo-spy film that gets so much right and knows how to keep things interesting throughout.

The chemistry between leads Chevy Chase and Goldie Hawn is great and we can really believe everything that they do.

The plot is a bit over the top, but they find a way to still make it work in an enjoyable fashion that it doesn’t matter that they are at the same time making fun of films in the genre.

The supporting cast of the film are also great and do some really entertaining things with this story.

Dudley Moore and Burgess Meredith both stand out here among them and help keep this film so much fun to watch unfold.

The choice to make this film have the feel of a classic 50’s suspense film works quite well and we can believe the idea that someone is still able to be drawn into an assassination plot by accident and still keep it plausible.

This movie is able to keep things suspenseful, thrilling and fun at the same time and is a joy to take in.

Bottom Line – Really fun pseudo-spy film. Chase and Hawn are great together and they are able to show the right amount of chemistry with these characters. The plot is a bit outrageous, but they are able to make it all work in such a fun way that it doesn’t matter.  The supporting cast also are able to do some great things here and Moore and Meredith stand out among them all.  The attempt to make this feel like a suspense film of the 50’s where someone inadvertently gets drawn into an assassination plot works really well here and is able to keep things both suspenseful, thrilling and fun at the same time. Recommended!

MovieRob’s Favorite Trivia – The film is an homage to the suspense movies of Alfred Hitchcock. The picture was released seven months after Mel Brooks’ Hitchcock spoof, High Anxiety (1977). Writer and Director Colin Higgins previously had written Silver Streak (1976), which was also a Hitchcock-like spoof thriller. (From IMDB)