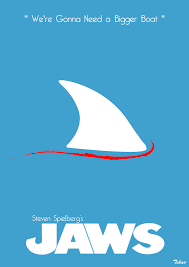 For this month’s next review for Genre Grandeur – Nature Gone Berserk Movies, here’s a review of Jurassic Park (1993) by me.

Thanks again to Barry of Cinematic Catharsis for choosing this month’s genre.

Next month’s genre has been chosen by Carl of Listening to Film and we will be reviewing our favorite Ensemble Movies.

“Well, uh, it doesn’t make much sense for a guy who hates the water to live on an island either.” – Hooper

Brief Synopsis – The sheriff of a small New England town must join forces with a scientist and a boat captain in order to try and put an end to the danger to the town’s citizens when it is discovered that a Great White Shark is in the vicinity and feeding on the people.

My Take on it – This is by far my first choice for a film that depicts the way that nature can truly go berserk in ways we can never quite imagine.

This is such an amazing film to watch and rewatching it isn’t tedious because it is done so well.

The story remains thrilling from start to finish and it remains that way no matter how many times one might have seen this film.

The story plays out really well and young director Steven Spielberg does a wonderful job keeping the tension level high throughout especially by use of unconventional means like thru music and intonation instead of just via visuals.

The story is more thrilling when we haven’t yet seen the Great White Shark and that is a wonder of its own.

The cast of this film is amazing and the trio of leads – Roy Scheider, Robert Shaw and Richard Dreyfuss are all superbly cast in their roles.

The characters are developed really well and the diversity of their personalities adds so much to the story as they each in turn slowly reveal more and more about themselves and why this hunt is so important them which in turn makes them closer as they steam forward to the climax of the story.

Shaw’s Indianapolis speech is bone chilling every time I listen to it largely due to his delivery of that monologue.

It’s a real shame that he was snubbed for an Oscar nomination for his work on this film.

The musical theme of this film is unbelievable and John Williams truly was able to create a very iconic theme that was able to change the face of music in film forever  since it adds to the tension of the story being told here.

The way that the film is shot gives the viewer a feeling as if they are right there in the water with the characters as the story unfolds around us and as the Great White circles around us as things get more thrilling.

There is no question about the fact that this film had such an impact that so many people became afraid to go in the water after watching the way that this story is told.

Bottom Line – Such an amazing film that is so thrilling to watch from start to end even after having seen it so many times. The story is told extremely well and Spielberg does an amazing job making the tension rise throughout the story sometimes by unconventional means like music and tone without utilizing real visuals. The cast is superb and all three of the leads are developed quite well.  The diversity of their personalities helps bring so much to this story as they slowly get to know one another better as things get closer and closer to the climax of the story. The theme by Williams is amazing and rightfully deserves its place in history as an iconic theme that is integrated so superbly into the story. The film is shot in a way that we feel as if we are right there on the water with these characters as they try to find and stop this natural killing machine from doing any more real damage.  This is one of Shaw’s best performances and its a shame that he wasn’t nominated for supporting actor at the Oscars that year since he stands out the most among the trio of actors.  There is no question as to why many people became afraid of going into the ocean after seeing the way this film is presented. Highly Highly Recommended!

MovieRob’s Favorite Trivia – When composer John Williams originally played the score for director Steven Spielberg, Spielberg laughed and said, “That’s funny, John, really; but what did you really have in mind for the theme of Jaws?” Spielberg later stated that without Williams’s score, the movie would only have been half as successful and according to Williams, it jumpstarted his career. (From IMDB)