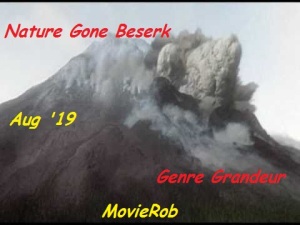 For this month’s next review for Genre Grandeur – Nature Gone Berserk Movies, here’s a review of Jurassic Park (1993) by me.

Thanks again to Barry of Cinematic Catharsis for choosing this month’s genre.

Next month’s genre has been chosen by Carl of Listening to Film and we will be reviewing our favorite Ensemble Movies.

Brief Synopsis – Scientists are brought to a secluded resort island where dinosaurs have been recreated via technology.

My Take on it – This is an amazing film that I have love ever since I first saw it when it came out 26 years ago.

It is able to find a way to truly epitomize the notion that sometimes people shouldn’t try and tamper with nature, no matter how good their intentions may be.

The story is told in an extremely thrilling fashion that helps keep the viewer on the edge of their seat from start to finish.

The fact that the story itself is told in a fascinating way that can be enjoyed on so many levels helps.

The cast is superb and they allow the story to move along at a great pace that keeps raising the suspense level as things move along.

The film has ground breaking special effects tat were able to prove to the world where film making can go with extraordinary effects to help enhance the story and keep things looking realistic and plausible.

The story slightly deviates from the book, but the visual aspects clearly make this the better of the two and give us an almost perfect film experience.

The musical score by John Williams is amazing and is able to give us both an epic feel for this story and also one of curious wonder and grandeur since it is able to meld together the present and the past.

This is one of the very best sci-fi/fantasy movies ever made and it won;t be easy for films nowadays to reach such heights.

Bottom Line – Amazing film that epitomizes the idea about how careful one must be when trying to play with nature. The story is quite thrilling throughout and is able to keep the viewer on the edge of their seat from start to finish especially given the fact that this is such a fascinating story that is multi-layered.  The cast is superbly chosen and they help keep the story moving at a great pace as the suspense level keeps rising as things move along. The characters are developed really well and that allows them to have some really intriguing debates between their differing philosophical and ethical views on things. The special effects are amazing and showed the world how it was possible to make a story like this look and feel so real even with the need to use special effects that work to make this movie even more plausible and realistic.  The story in the film slightly deviates from the one on the book that it’s based on, but they are still able to present us with such a wonderful story that is near perfect.  The score by Williams is superb and adds such an epic feel to things while at the same time gives the film a feeling of grandeur because of how it integrates the past and present so well.  One of the very best sci-fi fantasy films ever made! Highly Highly Recommended!

MovieRob’s Favorite Trivia – This movie and the book generated so much interest in dinosaurs that the study of paleontology has had a record increase in students. (From IMDB)