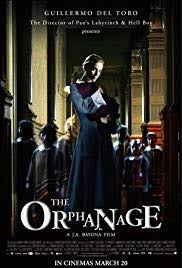 “Seeing is not believing. It’s the other way around. Believe, and you will see. ” – Aurora

Brief Synopsis – Upon returning to her childhood home which use to be an orphanage with her family, a woman soon discovers that her young son is able to communicate with an invisible friend.

My Take on it – I have mixed emotions with this film since on the one hand, I’m not a fan of horror films, but on the other hand, I wouldn’t necessarily classify this movie as an outright horror.

It worked for me largely due to the fact that it tries to show how a character can slowly descend into madness and everything that happens to her can be interpreted as real or imagined yet we never quite know for sure which option it is.

The pacing is done well too but as a horror film, the thrilling and gripping elements feel lacking and don’t manage to be scary enough for the genre.

The cast of this film is quite good and they find a way to make us feel all that they are going through.

Unfortunately tho, the premise could have been done more interestingly which would have made this even more enjoyable to watch unfold especially for someone like me who isn’t the biggest fan of films like this.

Bottom Line – Interesting idea that could have worked even better. The story moves along at a reasonable pace, yet they don’t manage to throw out enough thrilling or gripping elements for it to work even better as a horror film.  The story works largely due to the fact that it isn’t an outright horror film but rather plays out as a thriller where we can see a character descending into madness without knowing what is real or imagined.  The cast is quite good and make us feel everything that they seem to be going through.

MovieRob’s Favorite Trivia – When the writer told the little girl who plays the blind orphan that she had pretty eyes, she replied, “Oh, do you like them? I picked them out myself!” What he didn’t know: She was diagnosed at a very young age with a degenerative eye disease that was going to leave her blind. One of the last things her parents did while she could still see was let her see a big selection of glass eyes and choose the ones she wanted. (From IMDB)