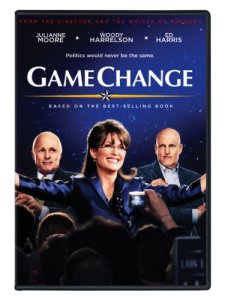 “[during the Katie Couric interview] Oh, my God. What have we done? ” – Steve Schmidt

Brief Synopsis – As the 2008 Presidential election draws closer, Republican nominee Senator John McCain and his staff make a bold move that will raise the stakes of the election with the hope of beating the Democratic nominee Senator Barack Obama.

My Take on it – As a fan of American Politics, I was quite excited to revisit this film that I hadn’t seen in over 7 years about the mishaps that changed the face of politics in the 2008 Presidential Election.

This is a film that finds a way to stay enjoyable throughout largely due to the way that they are able to capture the feel of being on the campaign trail.

We get to see the very candid views of the staff and journalists who are involved in the election as the days towards that important day get closer and closer.

The story is presented in a very over the top fashion yet they somehow are able to depict things as being quite truthful in a very crazy way that works.

The cast is superbly chosen and Ed Harris, Julianne Moore and Woody Harrelson are all perfectly cast in these roles because they come across as being so genuine and realistic.

They all manage to reflect how political insiders, politicians and the masses in general truly felt during the climatic days of the 2008 Presidential Election.

The film expertly utilizes real election footage with allows them to perfectly superimpose the actors into real events which helps make things so much more realistic feeling.

This film was quite deserving of its 5 Emmy Awards and 3 Golden Globes that both included Best TV Movie.

People often say that fact is stranger than fiction and this film is further proof of that because its quite astounding watching how things unfold.

Bottom Line – Such an enjoyable film that is able to capture the feeling among the staff and journalists as the election gets closer. The way things are presented seem over the top, but somehow these events are able to depict the truth in such a crazy way. Harris, Moore and Harrelson are all amazing here as they help reflect the way that political insiders and the masses felt during this election season. They do a wonderful job melding together real footage with ones created for this movie in order to superimpose the actors into the real events. Very deserving of its 5 Emmy Awards and 3 Golden Globes that both included Best Made for TV movie. This film is proof that fact is quite often much stranger than fiction. Highly Recommended!

MovieRob’s Favorite Trivia – The real Steve Schmidt, who is played in this movie by Woody Harrelson, called the film’s portrayal of him, and the events surrounding Sarah Palin’s GOP nomination as the party’s Vice Presidential candidate and candidacy, accurate. (From IMDB)