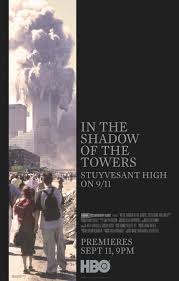 “It was so surreal. It just felt like a movie, you know. You’re seeing that debris and the smoke and all of just like a mass exodus.” – Catherine Choy

Brief Synopsis – A group of people who experienced 9/11 as teenagers in a high school mere block away from the towers reflect on how it affected their lives.

My Take on it – This is a film that I heard about recently and was quite intrigued to see how these former high school students would be able to help us relive that dark day from their viewpoint.

The overall premise of this film is quite fascinating and helps keep it interesting because we get to see how that fateful day helped create the future of these former teens and at the same time help form a very close bond among them due to their shared experience.

This film is able to take us into the mindset of a teenager and we get to see how that event helped shape their future over the past 18 years.

The movie does a wonderful job allowing these people to explain their thoughts and feelings about 9/11 and in some cases, their stories are extremely heart wrenching because they give off such an emotional punch.

The film feels a bit manipulating in the way that it plays the story out and that was completely unnecessary because it’s powerful enough without needing an agenda.

They expertly mix photos and videos of that fateful day to allow us to see who these people were on that day, what really happened on that day and eventually how it eventually affected each and every one of them (and us) in vastly different ways over the intervening years.

It’s too bad that this film wasn’t a bit more comprehensive and longer.

Bottom Line – Such a fascinating premise that works quite well. They are able to take us into the mindset of that fateful day 18 years ago and see how it helped shape these talented men and women in the years since. The way that they describe the experience itself is heart wrenching because they succeed in expressing so many emotions that have been with them for nearly two decades.  The fact that the film is a bit manipulating in the way it tells its story is fine, but was a bit unnecessary. The mix of photos and video from that fateful day also help the viewer relive the experiences of that dark day in history no matter where we were when it happened. Recommended!

MovieRob’s Favorite Trivia – Directed and produced by Emmy-winner Amy Schatz, the documentary weaves footage of the attack with compelling interviews with the students, who, as young teenagers, found themselves fleeing debris in the heart of the danger zone and faced with a harrowing journey home. Now adults, many from immigrant families, they speak with feeling about the backlash against minority communities that followed the attack and the deep friendships with classmates that got them through. A story about how it felt to be a young person at ground zero, the film explores the ways in which September 11th shaped these students’ lives and continues to shape our world today. (From Deadline)