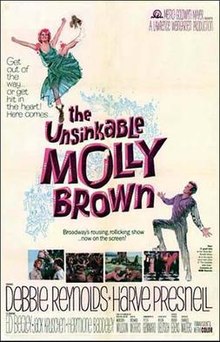 “Sure I may be tuckered, and I may give out, but I won’t give IN!” – Molly Brown

Brief Synopsis – Biopic of the famous woman who grew up in a poor family yet managed to find a way to marry a rich man and attempt to be a part of Denver high society.

My Take on it – This is a film that I’ve been interested in seeing for years ever since I was first introduced to the character of Molly Brown in Titanic (1997) back when I first saw it.

Unfortunately, this film is quite a disappointment and doesn’t allow us to really get to know any of the characters because none of them are developed well enough and they all seeing like stereotypes and caricatures instead of real people.

The story itself feels too superficial the whole way through and that takes so much away from the way that one can view this story.

The songs are all ok, but none are very memorable and they actually don’t manage to add anything to the story and in some ways just take away from it all.

This film spends the bulk of its time trying to show how important it was for her to break into the Denver High Society and spends mere minutes on one of the most important episodes of her life when she was saved while on the Titanic, which is shown as just a footnote here.

Debbie Reynolds is an interesting choice for the lead role and she does a fine job here.

I’m a bit surprised tho that she somehow managed to garner an Oscar nomination for her work here as this very famous woman.

Bottom Line – Interesting idea that falls a bit too short because it all feels a too superficial from start to finish. None of the characters are developed well enough and they all seem like caricatures.  The songs are fine but none are very memorable. They spend too much time dealing with how she planned to become part of high society and skim over the whole Titanic episode which is what made her even more popular. Reynolds does a fine job in the lead and was nominated for an Oscar for Best Actress for her portrayal of this famous woman.

MovieRob’s Favorite Trivia – The story of J.J. Brown accidentally burning his money after Molly hid it in the stove didn’t really happen. It was made up by a Denver journalist after Molly Brown became a hero on the Titanic. When asked by her daughter why she didn’t refute the false story, Molly Brown supposedly replied, “It’s better that they write *something* about me than nothing.” (Kathy Bates, as Molly Brown, repeats the story in James Cameron’s Titanic (1997).) Molly Brown is also said to have reported the story with a slightly different ending. Molly did hide money in the potbelly stove in their Leadville cabin, and Johnny unknowingly started a fire on a particularly cold night. That’s in keeping with the other version, but the end of the story, as told by Molly and reported in newspapers interviews during her lift, was a little different. Her addition was “Just think if it had been paper money!” The “money” was gold and silver coin which melted and melted to the stove. Miners didn’t trust paper money in those years. The stove had to be broken apart and resmelted to separate the iron, gold and silver. (From IMDB)