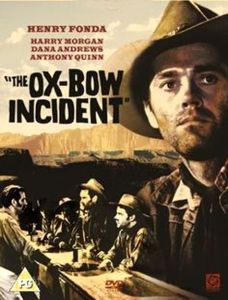 “[talking about Gil Carter] Whenever he gets low in spirits or confused in his mind, he doesn’t feel right until he’s had a fight. It doesn’t matter whether he wins or not. He feels fine again afterwards.” – Art

Brief Synopsis – A posse is sent to try and find the murders of a local farmer and after finding three men that they suspect of the crime, a debate rages between the posse members whether to use mob justice or rely on the courts to deal with the issue.

My Take on it – This is such an amazing and powerful film and is done so well.

The story is succinct and to the point and doesn’t drag things out at all and remains fascinating to watch from start to finish.

The story itself is superbly presented and they are able to bring us the debate between vigilante justice versus justice of the law and courts.

Henry Fonda is superb in the lead role and allow us to be a fly on the wall in this kind of debate.

His performance is quite subtle yet manages to be extremely powerful when looking at all sides of this debate.

Dana Andrews and Anthony Quinn also give very poignant performances as they try to show us different ways to look at the arguments presented here.

The fact that this film is a lean 75 minutes is great because it never feels as if something is added just as padding and it always feels as if the story is evolving the whole way through.

The characters are created and developed really well since they each feel quite distinct and have their own reasoning and stances for their opinions in this debate.

Each represents a different side of the argument and voice their opinions on how things should be dealt with here in this very important kind of debate.

This is an extremely powerful and poignant film that deals with an important subject whose debate is still raging on 77 years after this story was told.

This is a very unique kind of Western due largely to the tone that this film sets for this kind of story to be heard.

Very deserving of its sole Oscar Nomination for Best Picture

Bottom Line – Amazing film that is so interesting to watch. The story is quiet fascinating and they bring forth the debate between vigilante justice and justice carried out by the law and judicial system. Fonda is superb in the lead role and gives a subtle yet powerful performance here. Andrews and Quinn are also both excellent here in their roles which show powerful sides of this debate. Loved the fact that this film is short and doesn’t attempt to drag the story for longer than is needed.  The various characters involved in this debate are all quite distinct and add so much to the dialogue of these issues because they each are able to represent different sides and voices in this very important debate. Such a powerful and poignant film that is unlike any other Western due to the tone that appears throughout. Highly Highly Recommended!

MovieRob’s Favorite Trivia – Henry Fonda’s commitment to this film was partly due to his having witnessed, at age 14, the lynching of Will Brown in Omaha, NE, on September 28, 1919. (From IMDB)