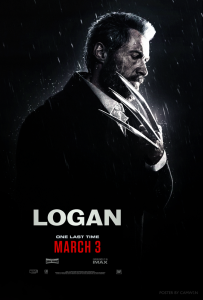 “[shows Logan an adamantium bullet] Found this in your pocket. Adamantium. If you are planning to blow your brains out, could you wait till you’re out on the high seas? I just mopped these floors.” – Caliban

Brief Synopsis – In the near future where most mutants have been exterminated, Logan must safeguard two mutants while searching for a haven that will keep them all safe.

My Take on it – This is a film that is somewhat of an anomaly in the X-Men franchise.

It is a solo movie about Logan yet is set in a future where there are practically no more mutants.

The film is much closer to being an action revenge thriller like film in the John Wick or Taken series as opposed to being a clear cut superhero film.

Hugh Jackman once again (for the final time?) plays the character of Logan so well and it’s so hard to find fault in his performance.

Even after so many years, he is still bale to portray the character so effectively.

Patrick Stewart also returns to the franchise in this film and gives a superb performance here which despite this film being an action/thriller/supposed superhero flick, he didn’t receive enough love for his performance during the awards season.

The story is grounded in reality much more than any of the previous films in the series and is effective in trying to show a world almost completely devoid of mutants who have been hunted by various factions over the years and how the few surviving mutants try to survive.

This is by far the darkest film in the entire franchise and it works because it is effective in showing the strengths and weaknesses of the various characters.

It’s too bad that this is meant to not feel like a superhero film because that is sorely missed when dealing with a character like Logan who is great under such circumstances, but feels too much here like just a typical revenge film instead of part of something so much greater.

Bottom Line – Great action film that despite being labeled a superhero film, doesn’t feature many special effects that would paint it as a sci-fi superhero film. This film is more in the vain of revenge thrillers like John Wick or Taken series. Jackman is great in the lead role and proves that he still has it in his to portray this character accurately throughout. Stewart is also superb here and I’m a bit shocked that even though this is an action/superhero/thriller, he didn’t get much love during the awards season for his performance here.  The film is more grounded in the real world and deals more with mutants in a world devoid of their kind which is quite effective. One of the darkest themed films in the franchise yet it remains effective in showing the strengths and weaknesses of some of its characters. Unfortunately since it’s a solo adventure, it lacks the feel of the rest of the films in the series and that truly feels missing since it would help differentiate this story from the other revenge type films that are out there. Recommended!

MovieRob’s Favorite Trivia – This is the last movie in which Hugh Jackman will play Wolverine. He has cited his age and his skin cancer as factors in him retiring from the role. He also said that having a discussion with Jerry Seinfeld played a part in retiring the character, as Jerry talked generally about how he wanted to make sure he never got to a point with Seinfeld (1989) where audiences were weary of seeing it anymore, saying, “Oh, it’s you again.” Jackman felt fortunate to have avoided this for Wolverine, and wanted to ensure it never happened. (From IMDB)