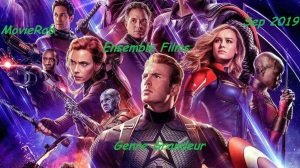 For this month’s next review for Genre Grandeur – Ensemble Movies, here’s a review of Circle (2015) by SG of Rhyme and Reason. 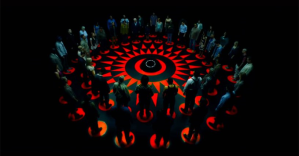 Someone must die one minute from now.
You lack any power on why, when, and how.
But someone must die, and it could be you,
Unless you choose somebody else.
But who?

You don’t know a soul as you look all around.
They’re nothing but strangers, their eyes on the ground,
For they have the same choice, deciding who dies,
And may well have voted for your own demise.

So who will you pick, knowing death is no joke?
The seediest? Noisiest? Least of the woke?
Will you choose at random, no malice or spite?
And if you survive, then does that make it right?

MPAA rating: Not Rated (should be R for plentiful language)

If an ensemble means that the entire cast are on equal footing with no clear main characters, then few films match that description as closely as Circle, a sci-fi chamber piece currently available on Netflix. I have MovieRob to thank for even alerting me to this low-profile film’s existence, and it’s a fine example of a simple premise expertly executed.

Partially inspired by 12 Angry Men, the plot can be summed up in one sentence: a group of fifty people wake up standing in a circle, unable to move or touch each other else they die, and they discover they collectively decide who dies every two minutes. That is practically the whole movie, people standing in a circle debating who should be the next to die. Yet that simple, disturbing idea turns out to be something intense and thought-provoking from start to finish, buoyed by a talented cast of totally unfamiliar actors who give no clue as to who will survive.

After the disorientation of coming to grips with what’s happening, assumed to be an alien experiment of some kind, the deliberation among the “survivors” illustrates how easily people judge each other, delving into such a diversity of social debates, from race to gender to religion. While some of the stressed characters seem to act rash and stupid at times, the film lets the characters’ words and actions speak for themselves, not judging them but allowing them (and the audience) to judge each other. As the bodies keep dropping, a major split concerns the presence of a young girl and a pregnant woman, half the group believing one of them deserves to be the last one standing while others see them as obstacles to their own chance at survival. The film asks, without a clear answer, how evil is the desire to live?

While laden with far too much profanity for my liking, Circle is nonetheless a fascinating study into human nature. The deaths, carried out by a lightning strike, have shock value, always unpredictable in their selection, yet are mercifully bloodless. Some of the logistics aren’t 100% clear, such as how people make their choice with an implant in their hand. And while I would have liked some last-minute twist (or rather a different twist), its final scene is more about sparking conversation, theory, and ethical soul-searching than providing a satisfying end. Compelling in its moral grayness, Circle is an ensemble thriller that asks uncomfortable questions through an alarming, improbable situation as only science fiction can.