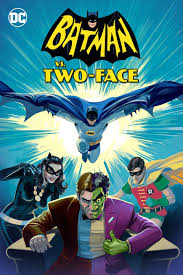 “I always knew you’d make an asp of yourself, Batboob. ” – King Tut

Brief Synopsis – After District Attorney Harvey Dent is disfigured by an accident, Batman and Robin must try and stop a new menace in Gotham City named Two-Face.

My Take on it – As a fan of the 1960’s Batman TV series, I was quite happy to see that this film bases much of its story and look on that series.

The film’s basic premise is the need for the Dynamic Duo to uncover the identity of Two-Face yet that information is well known and has been established numerous times over the years which makes it harder to feel surprised by revelations in this film.

They do a great job making this film seem like a throwback to the stories of the TV series especially when it deals with the characters, events, dialogue and obviously the “effects” of that series even 50 years later.

The idea to revisit the voice cast of the original show is also great and it was quite enjoyable to hear Adan West, Burt Ward and Julie Newmar reprising their roles from the series.

The addition of William Shatner, a 60’s icon himself as Harvey Dent  helps make this even more fun to watch even of the story needs some work.

Bottom Line – Average superhero story that would have been much better of there were more surprises along the way. The fact that the identity of Two-Face has been established so many times over the years makes it more difficult to be caught off guard by the revelations in this film. Really liked the way that this film is mostly a throwback to the Batman TV series of the 60’s and how they were able to utilize characters, events, dialogue and obviously the “effects” of that series 5 decades afterwards. The voice cast is great and it was fun listening to West, Ward and Newmar reprise their roles. The addition of 60’s icon Shatner also helps make this more enjoyable even if it isn’t quite enough.

MovieRob’s Favorite Trivia – Two-Face was among the more prominent long-established Batman villains who never appeared on the original Batman (1966). (From IMDB)