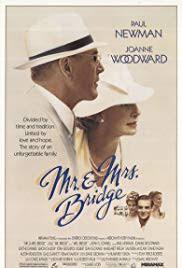 [As a tornado rages outside the room they are in] “Walter, don’t you think we might be better off downstairs in the basement?” – India Bridge

“India, for twenty years I’ve been telling you when something will happen and when it will not happen. Now, have I ever, on some significant occasion been proved wrong?” – Walter Bridge

Brief Synopsis – A wealthy lawyer and his wife must find a way to come to terms with the changing world as their children long for more modern views on the world during the 1930’s and 40’s.

My Take on it – This is a film that I had never heard of before finding it on a list of films that have received an Oscar nomination for one of its cast members.

I was actually eager to watch it since it features Paul Newman and Joanne Woodward as husband and wife onscreen and was curious to see how their real life marriage would help enhance their performances.

They are both superb in this film and yes, their real life marriage helps make the connection between their characters feel even more genuine and authentic throughout.

They are able to show both the closeness and distance that can happen between a couple especially during those trying days as the world was getting closer to another world war.

Woodward was deservingly nominated for an Oscar for Best Actress for her work in this film and it’s unfortunate that Newman also wasn’t able to get one since he too is superb here.

Woodward’s nomination shows that even subtle performances like hers can be award or just nomination worthy.

The story is pace quite slowly but they find a way to keep things interesting as the story moves forward.

Bottom Line – Excellent depiction of the way that the old world and new world began to clash in the days leading up to World War II. Newman and Woodward are superb together in these roles and allow us to feel both the closeness and distance between couple during those days. Woodward was nominated for an Oscar for Best Actress for her work in this film and showed that even a subtle performance like her can be award worthy.  The story is paced quite slowly yet still stays interesting throughout as we get a really enjoyable depiction of the kind of lives these people led in the Midwest during those times.  Recommended!

MovieRob’s Favorite Trivia – Newman and Woodward were a couple in real life as well, married from February 2, 1958 until Newman’s death in September 2008. (From IMDB)