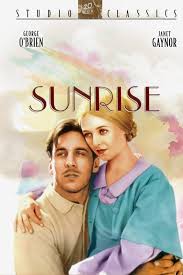 “They used to be like children, carefree… always happy and laughing… Now he ruins himself for that woman from the city – Money-lenders strip the farm – and his wife sits alone. ” – The Maid

Brief Synopsis – A man in a loving and monotonous marriage tries to find happiness with another woman.

My Take on it – This is a movie that I’ve been interested in seeing for years and have heard so much praise about it.

The fact that I’ve never been the biggest fan of silent films kept me away until now.

I’m actually quite happy that I finally got to see this film since the story is quite interesting to follow because it is both enjoyable and poignant at the same time.

The film does a great ob showing the various difficulties of marriage, which are apparently timeless and the various trials and tribulations that spouses can face when they are exposed to possible outside temptations.

The story is paced quite well and they are able to leave things very open as to what kind of decisions the characters will eventually make which helps make it even more enjoyable because it isn’t predictable at all.

This is a film that works on numerous levels are it is able to present us with both a real life story that remains interesting and at the same time an allegory about life and the potential dangers and pitfalls that we might encounter along the way.

Bottom Line – Interesting story that is quite poignant in the way it shows the trials and tribulations of marriage along with possible outside temptations. The story moves at a nice pace and makes us constantly wonder which direction the man will ultimately choose in life. The film works on numerous levels and is able to present both an intriguing story and an allegory about life at the same time.  Recommended!

MovieRob’s Favorite Trivia – Was the first and only film to win the Academy of Motion Picture Arts and Sciences’ (AMPAS) ‘Best Picture’ award in the category of “Artistic Quality of Production” (or “Unique and Artistic Picture”). This was the only year that this award was ever given out. (From IMDB)