This month’s genre has been chosen by Amanda of Hollywood Consumer and we will be reviewing our favorite L.A. Films.

Let’s see if I felt that this movie would be worthy of being in the company of my others favorite movies in the genre of L.A. Films.… 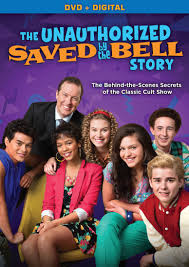 “Look. The point of this is for the show to work, we have to help each other. If we’re having fun, the audience will feel that. It’s true.” – Mark-Paul Gosselaar

Brief Synopsis – A behind the scenes look at what led to the show Saved by the Bell to be created and why is became popular enough to be a fan favorite for numerous seasons.

My Take on it – This is the film that started off this series and it isn’t as strong as some of the others.

The idea of this film (and series) is to try and show us how these shows were able to change television for the better.

This particular show changed Saturday morning TV because u until this show came out, most of the shows relegated to this time slot were family friendly cartoons

The film does a nice job showing how the various actors wanted to add their own input to the scripts in order to make the show much more provocative and relatable to teens.

The cast has a nice camaraderie throughout, but we still get to see the various splits that form among them which helps emphasize how teens can be affected both for better or worst by the industry of Hollywood.

This film glosses over some of the characters and fails to develop them more thoroughly which is a bit of a shame since this is meant to be an ensemble group.

Bottom Line – Nice idea that shows us how this kind of story was able to change the face of Saturday morning television forever. The way that they focus on how the kids wanted to let the show become more provocative works well. The camaraderie between the cast is shown as being a bit split and that helps show the way that teen actors can be affected both for better or worse in the industry of Hollywood. The film glosses over some of the characters and doesn’t develop them well enough which is quite a shame since this is meant to be an ensemble group.  The film feels a bit too short and might have been better if it ran a bit longer allowing us to dive deeper into some of the side stories that are brought forth.

MovieRob’s Favorite Trivia – Many of the original show’s core cast members – including Tiffani Thiessen, Mark-Paul Gosselaar, Mario Lopez and Elizabeth Berkley – have gone on record denouncing this film and the memoir it is based on. Dustin Diamond himself has stated that many of the events in his memoir were greatly embellished by a ghostwriter, and that, in fact, most of the events depicted in the book are completely untrue. Nevertheless, Diamond serves as an executive producer for this film. (From IMDB)

Genre Grandeur Worthy? – Not quite, one of the weaker films in the series even though it manages to tell things as if it is based on a memoir.