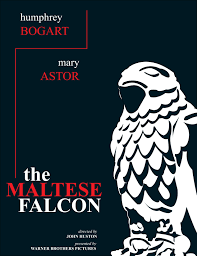 “We didn’t exactly believe your story, Miss Wonderly. We believed your 200 dollars. I mean, you paid us more than if you had been telling us the truth, and enough more to make it all right” – Sam Spade

Brief Synopsis – A private eye is hired for a simple job but when his partner is murdered, he tries to find out what is really going on with the seemingly innocent woman who hired them.

My Take on it – This is a film that I’ve only seen 3 times yet it always makes a big impression on me when I watch it.

This film is Humphrey Bogart at his best and allows us to watch a very intriguing mystery unfold in front of out eyes.

The characters are al quite layered and allow for us to quickly understand that none of them can be trusted about what they say or do which adds much more suspense to it all.

The film’s plot revolves around a long lost priceless artifact that may or may not still exist and all f the various characters will do whatever they can to get a hold of this important statue.

The film’s dialogue is cleverly scripted and this allows the viewer to learn so much about the characters and the situations that they have gotten themselves into because the conversation are filled with so much important exposition.

The cast of this film is spectacular with Bogart being joined by Mary Astor, Sydney Greenstreet and Peter Lorre who each are ale to carve out some great personality traits and expressions for their characters.

The stakes of the story are constantly raised by the fact that the characters are all quite intelligent and they engage one another in lengthy verbal debates that are fascinating to watch.

The story itself plays out just like a crime novel and that helps the story present so many nice twists and turns that all feel new and exciting as the story slowly reveals itself.

Bottom Line – Amazing film noir story that is played out so well. The characters are all very layered and you never know which of them to trust at any given point. The film’s plot revolves around a mysterious long lost artifact that may or may not still exist and the principal characters will all do whatever they can in order to acquire this statue. The dialogue is quite clever and allows us to learn so much exposition about everything transpiring along the way. The cast is superb with Bogart, Astor, Greenstreet and Lorre all creating very enjoyable characters who are constantly evolving and adapting as the story moves along.  The characters are also all quite intelligent which helps raise the stakes especially when they engage in verbal debates with one another. The story unfolds like a great detective novel and constantly finds new and exciting way to surprise along the way.  Highly Recommended!

MovieRob’s Favorite Trivia – John Huston recruited Mary Astor to play a prank on his father, Walter Huston, after the elder Huston had filmed his cameo. Astor called up Walter, telling him she was producer Hal B. Wallis’ secretary, and that Wallis thought he’d overacted during his scene. Huston was enraged, declaring that he’d never been accused of overacting in his life, but agreed to return the next day to re-shoot the scene. John then took the phone from Astor, identified himself as Wallis, and repeated the criticism. Walter grew even more furious, declaring that he’d already agreed to the re-shoot, and it was only when John exploded in laughter on the other end of the phone that Walter realized his son was playing a prank on him. (From IMDB)