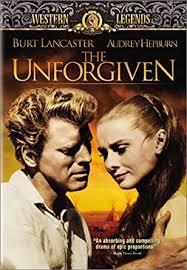 “When the wind’s in the right direction, I can smell Injun a mile off.” – Cash Zachary

“Well, I hate to disappoint you, but that smell is comin’ off of me. I haven’t changed my dirt since Wichita, Kansas.” – Ben Zachary

Brief Synopsis – A family living on the frontier is surprised when a neighbor claims that the daughter of the family is perhaps really a stolen Indian child that was raised as their own.

My Take on it – This is another film that I came across by accident and was looking forward to seeing it since it was directed by John Huston.

Unfortunately, the film is quite uneven and despite having a nice premise, things don’t work well enough along the way to help keep it interesting.

The cast is actually amazing with Burt Lancaster, Audrey Hepburn, Lillian Gish, Audie Murphy, Charles Bickford and Doug McClure all doing great jobs with their characters but unfortunately the story itself hampers them from doing even more since certain scenes come across as seeming quite unrealistic.

This movie’s story tries too hard to be an allegory fr racism and just doesn’t manage to feel as impactful as it might have been.

The film tries to bring forth a debate about issues dealing with race and it comes across as being much too lop sided and doesn’t work realistically enough to convince.

The fact that Huston tells this story from numerous perspectives helps things a bit in establishing the place and time but unfortunately even that isn’t enough to make this story feel poignant enough.

Bottom Line – Interesting idea that is unfortunately not realized well enough here. Great cast is somewhat wasted because things come across in a pretty unrealistic fashion. The story tries to be an allegory for racism in the world yet isn’t as impactful as it could have been. The debate that is held throughout this story is too lopsided for its own good and doesn’t work well enough.  Huston’s direction helps a bit because the story is told from various viewpoints but even that isn’t enough to help make this story poignant enough.

MovieRob’s Favorite Trivia – Before filming began, director John Huston and star Burt Lancaster took actress Lillian Gish out to the desert to teach her how to shoot, which she would have to do in the film. However, Huston was astounded to discover that Gish could shoot more accurately, and faster, than both he and Lancaster, who thought themselves expert marksmen. It turned out that early in her career Gish was taught how to shoot by notorious western outlaw and gunfighter Al J. Jennings, who had become an actor after his release from a long prison sentence for train robbery and was in the cast of one of her films. She found that she liked shooting and over the years had developed into an expert shot. (From IMDB)