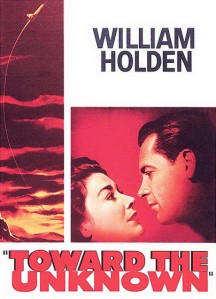 “[to Maj. Lincoln Bond] Even with torture, you’re not the kind to crack.” – General Bill Banner

Brief Synopsis – A former test pilot who was a prisoner of war during the Korean War tries to get a job testing planes again, but his checkered past makes things much more difficult.

My Take on it – This is a film that I came across by accident and was quite surprised at how enjoyable it was.

As a fan of William Holden, as soon as I saw his name appear n the screen, I knew that this movie would probably be worth my time.

The premise of the film is quite good and they make things work so well.

This is a movie that deals with some issues that were quite relevant and fresh on the minds of the audience when it was released in the mid-50’s.

The wounds that the Korean War left on people and the race to explore and test the limits of man are blended together in a realistic fashion and helps keep the story quite compelling throughout.

Holden does a great job dealing with such a complex character who is torn by his emotions yet still wishes to continue his pursuit of his passion for being a test pilot.

He is able to make this character one that we can care about and it is mostly done in a subtle way through various gestures and actions along the way.

His past is left quite ambiguous and secretive yet that helps enhance the way that we slowly learn more and more about him.

This film is also a love story and those aspects of the film are also handled quite well even if certain parts of it are left a bit too unclear and unexplained.

Really loved the way that this film was able to integrate real footage of test pilots and the X-2 in order to help make this story feel even more realistic.

Bottom Line – Great premise that works quite well. The film deals with issues that were quite relevant to the times and was very fresh in the minds of the audience at the time. The mix of former war wounds and the continued exploration of the limits of man go hand and hand here and allow for things to be quite compelling. Holden does a wonderful job in the lead and makes us care so much about his character based mostly on his actions and gestures than on the brief and subtle ways that he describes his past.  The love story aspects of the story also work really well even if certain parts of it are left a bit too unclear and unexplained. Love how they were able to integrate real footage of the X-2 that helps enhance this film’s story even more. Recommended!

MovieRob’s Favorite Trivia – The scene with William Holden losing control and tumbling in the X-2 is depicted with actual footage from test pilot Chuck Yeager’s 70,000-foot freefall in the Bell X-1A in 1953. (From IMDB)