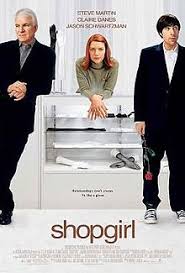 For this month’s first review for Genre Grandeur – L.A. Films, here’s a review of Shopgirl (2005) by Amanda of Hollywood Consumer.

Thanks again to Amanda of Hollywood Consumer for choosing this month’s genre.

Next month’s genre has been chosen by David of Blueprint Review and we will be reviewing our favorite Hong Kong Martial Arts Movies.

Please get me your submissions by the 25th of Nov by sending them to hkdave@movierob.net

Try to think out of the box! Great choice David!

Let’s see what Amanda thought of this movie:

I was asked by Movie Rob to pick October’s theme for Genre Grandeur and since it’s nearing the end of the month, I figured I’d better get a few reviews up.

I picked LA Films as my genre, which I thought was a fitting choice seeing as I’m an LA native, and love films based on, or set in Los Angeles. I also like that it can include films from other genres.

Rob also asked that I recommend a film from the genre. It was a bit tough thinking of something he hadn’t already seen, or reviewed but in the end I suggested Shopgirl. Based on a novel of the same name, written by Steve Martin, it is a romantic drama that tells the story of a young woman working and living in Los Angeles, and the relationships she develops with two very different men.

Now, I may be cheating a little but I wrote an essay on this story back in college, and I found it on my computer, so I thought I’d share an edited version of that as my review.

As I watched Shopgirl, a thought kept running through my mind. People have detached themselves from others in their attempts to get ahead and keep up with the demands of a rushed life. They bury themselves in finding material success and when it comes to emotional satisfaction they are at a loss at what to do. They get so caught up with the thought of making a name for themselves that they can no longer function efficiently in any sort of non-business relationship. The idea is greater magnified in large cities where people are surrounded by the pressure to be successful. Shopgirl is a perfect representation of this idea of loneliness in the big city. The main character, Mirabelle, is a symbol of those who come to Los Angeles to find great success and happiness and end up finding only marginal success and loneliness.

Mirabelle has come to California to be an artist but works at the glove counter in a high-end department store. She makes just better than minimum wage and she has close to no social life. She is surrounded by people and does not know how to reach out to anyone. Her friends are hardly worth keeping; they leave her stranded most of the time and her love life is almost as non-eventful. She begins a rocky relationship with Jeremy who is about her age but very immature. They have some odd interactions that usually end with Jeremy making a complete fool of himself. Mirabelle then begins a relationship with the much older Mr. Ray Porter. However, they both expect different things from the relationship and communication is not always perfect which hurts them both in the end.

These interactions that Mirabelle has with others demonstrate how, even though situations may be awkward, people will still put themselves in that position just to feel close to someone. Even within a large city that is full of life and people, sometimes there are those who are unable to connect with others. They have detached themselves so much that they have to create “accidents” or awkward situations just to be acknowledged and responded to. Loneliness is a major theme in Shopgirl and there is a perfect example of this idea when Mirabelle calls Jeremy at one point for the sole reason of going to bed with him in order to have him hold her afterwards. They go through with the act because they are both social outcasts who are so desperate for human touch that they will do almost anything.

Martin’s ability to capture the true thoughts and feelings of his characters is amazing. I think what makes this film so worthwhile is the complicity of the characters and their own epiphanies about their actions. After their relationship has ended Ray comes to realize what he did wrong with Mirabelle. He only wanted a part of her. She wanted more. She wanted to be loved and cared for and he only wanted what would satisfy him physically. Their relationship could only end in the way that it did because neither of them was truly honest with what they were searching for. Only after the fact do they realize how they have inevitably set themselves up for disappointment. In the same fashion as this discovery, Jeremy makes his own discovery about himself. He goes through a change while he is on the road. When he comes back, he has matured to the level that Mirabelle is at. He has reached a point where he and she want the same thing. Jeremy is finally able to give Mirabelle what she needs and in return he gets the companionship he is searching for. They are both able to give some of themselves in return for some part of each other. This adds a nice touch to the end of the story. Mirabelle has found someone to love who will love her back and Ray has realized that what he is searching for cannot be satisfied with meaningless physical relationships.

Shopgirl shows LA in an interesting light. It makes casual references to the sites and restaurants and streets that everyday LA inhabitants visit and it seems to praise them. Yet, at the same time it criticizes the materialism of the city and its people. It shows Mirabelle’s ease at going through her daily routine but contrasts that with her deep depression. It is contrasts Mirabelle, who is a shy wallflower with her coworker Lisa, who has completely taken advantage of the material side of LA.

Shopgirl is the story of finding yourself in a place that takes the opportunity for identity away. It is the story of finding connection when it seemed impossible. It is the story of learning and growing in a city that restricts and limits people to a certain lifestyle. Mirabelle has found happiness in the end because she has learned from her mistakes and Jeremy has grown up. Both have come to understand the need for human touch in a big city where the opportunity to connect with someone does not happen often. So often people forget that there are others who go through the same transitions and pains that they go through. There is always someone who knows what it is like to feel lost and lonely in such a foreign place.